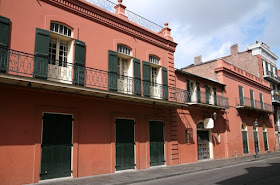 
Centralized in the French Quarter is one of the most popular and successful little theatres in the country. For nearly a hundred years, this little theatre, or petit theatre, has presented plays, recitals and other great shows on a regular basis. The theatre troop was originally organized in 1916 by the New Orleans Chapter of the Drama League of America. Just starting out, this small group began by conducting performances in the drawing room of one of its members, hence later changing their name to the Drawing Room Players. The group and their shows became more and more popular in the area so they needed to expand to a larger studio. Sometime around 1920, the group began renting a portion of the Lower Pontalba Building adjacent to Jackson Square. If the name Pontalba rings a bell, remember the building was constructed by Baroness Pontalba from an earlier location we mentioned. See what happens when you have so much action in such a small grid of a neighborhood? History overlaps itself and locations begin to tie in with one another. Similar to the “six degrees of separation” only with New Orleans, you never get past the third degree before everything intertwines with each other.

The popularity of the Drawing Room Players continued to grow and so did their audience. Once again, they were looking to expand and move into a larger theatre. In 1922, they moved into the building at 616 St. Peter Street. The building which would soon be known as Le Petit Theatre was nearly as old as the city itself. The original structure on the property was built in 1789 but was later destroyed in the Great Fire of 1794. In its place, a grand home was built in 1797 for Don Manuel Gayoso de Lemas, the last Spanish Governor of Louisiana. Through the early 1800’s, the home would go through many different hands and used for multiple purposes such as a barracks for Union soldiers during the Civil War. As you can see in the following photograph, in 1885 the building was used as the Café de Louisiane. Following the war, the home would go into great despair until it was purchased and remodeled by the Drawing Room Players. Additional structures were added to the original home to form the current theatre. By the late 2000’s financial issues temporarily shut down the theatre. Fortunately, a few smart business moves were made, reopening the popular location, as well as remodeling it and opening a restaurant in part of the theatre. Today, Le Petit Theatre is more successful than ever, hosting some of the most popular Broadway classics around.
I had always heard that Le Petit Theatre was haunted but as I began to conduct more and more research, I really had no idea it was as haunted as it actually was! The number of reports here were quite surprising as well as the number of suspected spirits that reside here. The oldest spirits that occupy the theatre are said to be those of young Union soldiers that were housed here in the early 1800’s. Several apparitions of soldiers have been witnessed wandering down the halls with one particularly vane officer that has been seen adjusting his hat, gloves and medals, as if he was standing in front of a mirror. Staff has also heard the sound of boots patrolling on the second floor along with indecipherable whispering and chatter.
For those of you who like some good old fashioned steamy dirt, look no further than the next haunting due to a former employee by the name of Caroline. As rumor has it, she was partaking in a pretty intense love making session up along the catwalks over the stage with a maintenance worker. It still remains a mystery as to whether Caroline either accidentally fell or was thrown by the drifting stagehand. Whatever the case, Caroline’s half-naked body had fallen and was entangled amongst the wiring and curtains. Her spirit is still said to wander the theatre in a sad state, often moving curtains and generating unexplainable cold spots around the stage.
Other ghostly figures that have been reported here are the apparitions of a nun, a black male and an elegantly-dressed Quadroon woman. For the music lovers out there, the sounds of a piano have been heard echoing through the building in the wee hours of the morning. Many also feel that Le Petit Theatre is also haunted by the less than friendly spirit of a former manager who reportedly 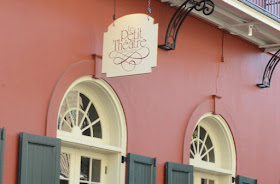 shot himself in the area that is now the office lounge. His presence often generates poltergeist-like encounters, causing doors to open and close while objects and personal possessions go missing for no apparent reason. The location where the suicide took place often causes staff to feel like they are being watched, as the hair on the back of their neck will stand up.
As I mentioned, Le Petit Theatre is in no short supply of quality stage performances and haunted activity. With the property having such a rich history, it is no wonder that such an eclectic bunch of spirits still reside here. Visitor take heed; If you are ever at the theatre, watching a performance of Jesus Christ Superstar and think to yourself, “Since when have they added a naked woman to the show?” don’t worry, this is not an X-rated version. You are simply joining the large group of others that have had a paranormal experience at Le Petit Theatre!