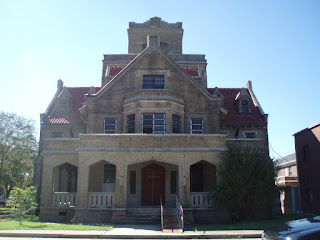 Although not necessarily one of the most haunted places I have investigated, the Beauregard Gothic jail has long been one my favorite places to visit. Possibly it is due to my years working inside of prisons; I have always been fascinated with this ornate structure. It’s not often you find a building so beautiful that was meant to house the complete opposite. This jail is definitely that example.
This three-story Gothic structure was built in 1914 and operated as the local jail until 1984. Its design is quite ingenious, as a single spiral staircase takes you to each floor. The first floor consists of a few offices and what I can best describe as a “drunk tank”, as it is one large dormitory-style room. The second and third floors are similar, as there are four identical cells that branch out from the small rotunda. A dumb waiter took food and supplies through the different levels.
Another interesting feature is the underground tunnel that connects the jail to the adjacent courthouse. This conveniently allowed officers to escort inmates directly from the jail to a back staircase of the courthouse that led directly into the court room. This definitely kept security at a maximum and never allowed the inmates to come in contact with anyone from the general public. The most notable section of the jail is the third floor, which served as a makeshift gallows of sorts, as several executions were carried out here. Two in particular would go down in the record books due to one of Beauregard Parish’s most heinous crimes!