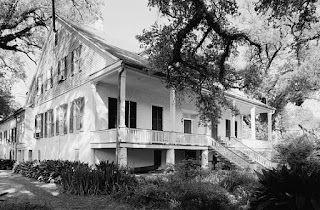 Natchitoches and its surrounding areas are definitely some of the oldest settled land in Louisiana. With age, comes experience, and these grounds have a lot of stories associated with them. Such is the case in the small town of Derry, adjacent to Natchitoches, where a lovely plantation home has quite the background.
Magnolia Plantation sits on a large plot of land that was initially obtained by Jean Baptiste LeComte II, by means of French and Spanish land grants in the mid 1700’s. The current plantation was not built until the 1830’s. The home was burned down by federal troops in 1864 and not rebuilt until the 1890’s.
During its prime operating days, the plantation was a major cotton supplier. As the Great Depression drew nearer, and the cotton market became unstable, the plantation began to suffer financially. It struggled through adversities though and is still owned by descendants of one of the original families who lived here. The eighteen acres of land, which is now a park, consists of the main home, a blacksmith shop, plantation store, gin barn, eight slave cabins, and former slave hospital that at various times housed the owners and overseer.


The slave cabins here are quite unique as they are in extremely good condition. Sharecroppers inhabited the cabins after Emancipation and it is said that black laborers lived in them all the way up to the 1970’s. Due to this, much of these building are still in great shape, allowing visitors to take a step back in time. Much of the equipment used to harvest and process the cotton are also still intact.
Behind the beauty of the land and the home, the fact that this was still a slave plantation was apparent. Although owners claimed humane treatment of the slaves, written accounts and torturous relics found tell a different story. As with many of these plantations, tales of beatings, cramped living conditions and public humiliation were not that rare. To cope with this horrendous lifestyle servitude, slaves tried their best to deal with the harsh reality of the time by having families and making a small community within a community. They also turned to religion as a safe haven, often in the form of voodoo.
I will not go too in-depth on the subject of voodoo, as you can read up more on the subject in my 2008 book, "Paranormal Uncensored: A Raw Look at Louisiana Ghost Hunting" (insert cheap plug here). However, during this era, plantation owners often gave their slaves off on Sundays as their day to worship. Of course the plantation owners would have disapproved of full blown voodoo ceremonies going on in their back yards, so the slaves had to find ways to mask their religion. They did so by incorporating much of their religion into your standard Catholicism. The slaves would worship one lua, or god, while representing it with the Virgin Mary for example. This often pacified the plantation owners enough to allow the slaves to continue with their desired worship. To this day, there are heavy undertones of Catholic icons in present day voodoo.
It was apparent that the slaves were not too pleased with the owners at Magnolia. As a way to secretly rebel against their captors, they found ways to slip in a little gris-gris, or curse, whenever they had the chance, in the hopes of seeking a little retribution. This is evident to this very day, as the crosses that mark the graves of the former owners on the property, contain hidden voodoo symbols, or veve, that represent the different voodoo gods. It can be assumed that the enslaved blacksmiths who made these crosses wanted to get the last laugh in the hopes of sending their owners to the other side with a little unwanted going away present. Eternal Damnation: The Gift That Keeps on Giving!
There are numerous other ghastly tales of terror that have taken place at Magnolia, attributing to its haunted status. One section of the home was used by the slaves to cure meats that were raised on the land. A slave overseer would always use this area to beat and torture other slaves. One day, enough was enough, and several slaves rebelled against the overseer killing him, and rumor has it, butchered him along with the rest of the fresh meat. Care for fresh sausage?
There is a particular room in the home dubbed the “Dying Room”, where several residents have died in addition to a Union soldier who was poisoned and died a slow and excruciating death here. It is also said that there are numerous Confederate soldiers that are buried on the grounds, although these plots have never been found.
For years, residents and visitors alike have reported seeing apparitions and shadows roaming through the home and grounds. The face of an elderly man has been seen in a mirror. Disembodied voices have been heard and doors seem to open and close on their own. Staff have often reported that the motion sensors on the alarm sensors have been activated with no one present.
With dark history ranging from beatings, deaths, murders, and voodoo, Magnolia Plantation is said to be one of the most haunted locations in Louisiana. Amazingly enough, this is one place we have not have the luxury to investigate but I can assure you I will be working on this one very soon!