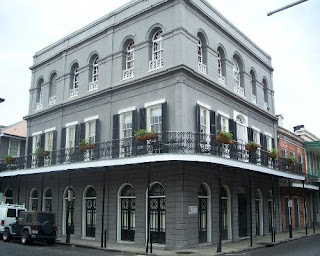 Of the thousands of haunted locations throughout the country, what better place to start than with a location so notorious and shrouded in mystery. It's history is one of the most interesting and gruesome you will ever hear so why not start with the LaLaurie Mansion! The events that took place here would go down in the annals of American history as something that could have easily been coined from a horror movie. As a matter of fact, I believe much of this story influenced the season of American Horror Story that took place in New Orleans.
I was first made aware of the LaLaurie Mansion as a young teenager. Strolling the urine and stale beer-filled streets of the French Quarter on a raucous Saturday night, my cousin and I were inclined to take one of the many haunted history tours that were offered in the area. I mean come on...where else could under aged kids walk around with drinks in our hands while listening to the mad and macabre that makes up New Orleans? I was all in! We paid for our tickets and met at a local bar that could have well been from a third-world country. To this day, I don't think I ever saw a filthier toilet in my life. I don't think I would even let my dog take a crap in there, for the fear of dysentery and staff infections that would have been obtained in there!

We were greeted by an individual dressed all in black, with garb that gave me the impression that he thought he was a vampire. The blood that this poor sucker sucked must have been of the portly kind, as he was the plumpest Nosferatu I had ever encountered. With his fake Transylvanian accent and his dirty top hat, he guided us through the French Quarter, stopping at various locations along the way either to talk or simply catch his breath. The tour would conclude at the corner of Royal and Nicholls Streets, at what may very well be the single location that caused me to become so enthralled with the paranormal, especially in New Orleans.
This incredible story starts off with a beautiful young French-Creole woman by the name of ﻿﻿﻿﻿Delphine Macarty. One of five children, Delphine was raised into what many may consider for the time as a luxurious lifestyle. Her parents, Barthelmy Louis Macarty and Marie Jeanne Lovable, were prominent members of the local community. Growing up, Delphine had all the finer things in life and was said to be a very attractive woman, attracting the attention of many young men. She married her first husband, Don Ramon de Lopez y Angullo, in 1800. Angullo was a ranking officer in the Spanish Army. After an eight year marriage, Angullo died in Havana on his way to Spain. Delphine then married her second husband, a prominent local banker, Jean Blanque. Apparently, life expectancies were not very long in the 1800’s, as Blanque also soon died only a few years after marriage. Normally an odd coincidence, once you hear the monster that Delphine transforms to, you may begin to wonder if “black widow” could also have been added to her resume.
In 1825, Delphine would marry her third and final husband, a young physician by the name of Leonard Louis Nicolas LaLaurie. The now Madame Delphine LaLaurie was a very domineering woman with plenty of business smarts. With inheritances from her wealthy parents and deceased husbands, she would handle the family’s finances without little interaction from her husband. In 1831, Delphine would purchase a huge mansion at 1140 Royal Street. The successful woman was admired by the local community, as she was considered one of the more prominent individuals in the area. Simultaneously, Dr. Leonard sat in the shadows while his wife ran the show. From this point, things not only grow incessantly interesting but details are sketchy. Most say that the couple began to argue and fight constantly, while  Delphine made accusations that Leonard would beat her and the couple would separate on and off.
It’s at this point I must also mention that due to the fact that Delphine was raised in a home where slaves were looked at and treated as sub-human; she would carry on this belief with her own slaves. Madame LaLaurie was notorious for the abusive treatment she gave to her servants. It has often been said that she kept one of her slaves chained to the stove in the kitchen. No one has ever been able to confirm whether or not Dr. Leonard was equally as sinister, though some have said he often took his work home with him, performing various medical experiments on his unwilling subjects. Those who knew Delphine on a personal level said that her immense hatred and mistreatment of her slaves did not begin until marrying the doctor. Did Delphine’s “Dr. Jeckyl and Mr. Hyde” persona culminate from an abusive marriage, did she simply go mad for no apparent reason, or was Dr. Leonard the catalyst to awaken Delphine’s inner demon? No one may ever know what set Delphine off. From my research, it is very possible that she suffered from a severe bi-polar disorder. Reports say that when Delphine was in public, she was quite respectful to blacks and it is documented that in 1819 and 1832, she even emancipated two of her slaves.
As time went on, the LaLaurie’s relationship became more and more stressed and Delphine fell deeper into madness. Once looked at as the upper echelon of society, Delphine grew darker and more sinister with each waking day. However, no one knew exactly how evil she had become. Curious neighbors would often hear horrible screams and sounds of pain coming from the mansion and they would notice that the couple seemed to rotate their inventory of slaves on a frequent basis. No one could ever understand how it seemed as though Madame LaLaurie was always replacing her slaves with new ones. Where were they going? This question would soon be answered, although the results were beyond anyone’s imaginations.