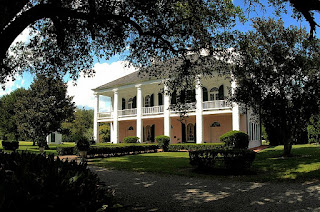 
If I haven't already informed you, I am quite man enough to admit that I have an intense case of arachnophobia! It's pretty pathetic how severe it is, as I will literally freak out if I get near a spider bigger than a dime. I can remember putting laundry into the washer once and as I pushed down on the clothes, a spider about as big as a fifty cents piece sprang from the clothes, onto my arm! I honestly do not remember much, as I seemed to come out of my own skin, hitting a level of consciousness that is hard to comprehend. Next thing I remember, I am stripped down to my underwear, running around the house, flailing my arms like an idiot! Needless to say, it was quite a sight! Oddly enough, the types of spiders I hate the most are the ones that are the most harmless.  The proper term for this species is the golden silk orb-weaver but in Louisiana, they are referred to as banana spiders. They are massive in size, ominous in color and make gigantic webs with strange zig-zag patterns down the middle. I have always been told they are non-poisonous but I have never bothered getting close enough to one to find out. Ironically, the next location I will mention is home to the largest banana spiders I have ever seen. Maybe that's why it's one of the only plantations in Louisiana that I have yet to investigate!