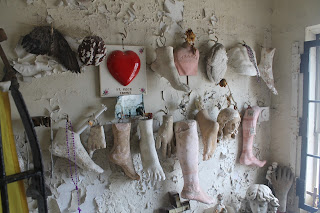 As we have just finished discussing the Crescent City's oldest and most well-known cemetery, it is only fitting that we jump straight into what many would say is the city's strangest cemetery. For a city that is known as the place to go to expose your breasts and dress like the members of the Village People without being looked at twice, in order for a plain old cemetery to be called strange, it must be one hell of a place to visit!

As I mentioned, it is a common practice for mourners to leave small trinkets at grave sites as a sign of remembrance and affection. Especially, when the Voodoo religion is involved, certain Lwa, or Gods, are honored with items such as rum, cigars, hard candy and money. However, I must say, I have never heard of prosthetic limbs and plaster casts of body parts being left behind as a sign of devotion and faith. Such is the case with the St. Roch Cemetery and Chapel, several blocks east of the French Quarter.


Taking one look into this small run-down chapel, and you think you are in a 1990's Nine Inch Nails music video. One corner of the room may contain fake legs while a small shelf may show off
glass eyes. The chapel looks more like Dr. Frankenstein's workshop with a dash of Catholicism thrown in for good measure, as opposed to a place of worship. However, once you learn the backstory for the strange tradition, and unique anatomically-correct décor, you can digest the scenery a tad bit easier.
The history of this unique chapel and cemetery begins in 1867, when a German priest by the name of Reverend Peter Leonard Thevis arrived in the city. During this time, the Yellow Fever epidemic was in full force, as people were dropping like flies. In an act of pure desperation, Reverend Thevis turned to his faith in God and his prayers to St. Roch, the patron of good health and, oddly enough, dogs, invalids, surgeons, sick cattle, tile-makers and bachelors. Not to be blasphemous, but that is one hell of a combination! After much prayer, Thevis vowed that if no more of his parishioners would die from the wide-spread disease, he would erect a special chapel in honor of St. Roch. Surprisingly, not a single member of the church would succumb to Yellow Fever during the 1867 epidemic.
Reverend Thevis was a man of his word and would begin by establishing the cemetery, called the Campo Santo, or the resting place of the dead. He would then travel to Europe to learn the architecture and style of some of the cities' most notable cathedrals. He would return to build his Gothic chapel, completed in 1876. As word spread, thousands of people would flock from all around
to worship in the chapel, praying that their ailments were cured by St. Roch. As time passed, it appeared that many of the visitors' prayers were being answered. As an honor to the beloved Saint, the revitalized patrons would return to their beloved chapel and leave behind a reminder that they had been healed. Those who were crippled, left prosthetics or plaster molds of their cured limbs. Those who could now see, left behind glass eyes, which is odd because it's not like one would receive an eye transplant!? I wonder what was left in honor of being cured of erectile dysfunction? Sorry, I couldn't help myself!
As I mentioned, the eclectic St. Roch was also the patron Saint of bachelors. This would begin another tradition, as young maids who were in search for a husband would make long pilgrimages to the chapel, leaving behind small amounts of money in the hopes of finding Prince Charming. What
these poor women didn't realize is that they could have saved their money and stayed away from the cemetery, while simply visiting any of the local bars and saloons in the city, as there were plenty of willing young lads there. Boy, have times changed!
It is no surprise, that with a cemetery and chapel decorated in such oddities, tales of hauntings and strange encounters with the unknown are plentiful. Some feel that much of the supernatural happenings here are due to Voodoo rituals that are said to have taken place here over the years. Other, more over-the-top stories tell of large ghostly canines wandering through the cemetery. Could these be related to the previously mentioned “hell hounds”? Visitors late at night have captured unexplainable electronic voice phenomena and weird light anomalies. Personally, I think the cemetery is not as haunted as many claim it to be. In places such as this one, the scenery and environment are too convenient for the perfect haunted backdrop. Much may be psychological, as anyone who stands in a room filled with religious iconography, fake limbs and eyeballs have no choice but to be creeped out!