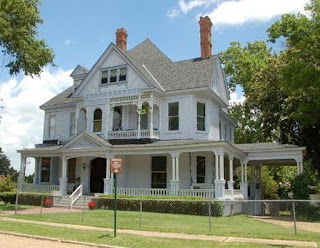 The historic downtown Shreveport area is filled with quite an assortment of unique locations. With a cornucopia of cemeteries, municipal buildings and grand mansions, a walking tour of this area will give you a great feel for the life and times of this fruitful city. Fortunately, the historic district of Shreveport is a paranormal investigator’s dream, as literally every one of these locations come with their share of haunts. Fortunately, with our star-studded Northern Chapter running wild from Shreveport to Monroe, we have been able to be the first to investigate many of these locations. Our pioneering of many of these spots has opened the paranormal floodgates, as our investigations of many of these areas have garnered a great deal of attention to other investigators and paranormal television programs.
One of the flagship homes that are a regular stop of many of the haunted history tours in Shreveport is the Logan Mansion. The Logan Mansion was built in 1897 by Lafayette Robert Logan, a prominent beer and ice manufacturer. Designed by architect Nathaniel Sykes Allen, the mansion is one of the finest remaining Queen Anne Victorian houses in the city, with an extremely ornate interior and equally-elaborate exterior. In the mid 1900’s the home was turned into a boarding home for teachers. Today it is operated as a historic mansion available for tours.

The dark story that is most commonly associated with the Logan Mansion is a tragic event that involved the neighbor’s young daughter. Adjacent to the mansion, sat the residence of local physician, Dr. Randall Hunt. For reasons that remain unknown, on June 20, 1904, Hunt’s eleven year old daughter, Theodora found her way to the attic area of the Logan Mansion. No one knows what she was doing there but she supposedly fell to her death. According to Dr. Cheryl White’s book Historic Haunts of Shreveport, the death certificate for young Theodora notes the cause of death as “heart failure”. Either there was a highly-doubtful typographical error on the certificate or Theodora did, in fact, die before actually falling from the attic. Then again, who knows if Theodora even fell in the first place? We have definitely learned that the truth can get misconstrued more and more over time, whether it is for purposeful elaborations or lack of knowledge by the story tellers. For centuries, people have been a sucker for a good spooky story. What may have begun as a young girl with heart problems could have quickly escalated to a depressed teen who took her own life by jumping from the attic of a home, all in the name of a good story.
Whatever the case may be as to the method of poor Theodora’s death, many feel that her spirit lingers around the Logan Mansion. Numerous people have reported extreme feelings of uneasiness in portions of the home along with seeing the apparition of a young girl. In one case, a maintenance crew, assigned to remodel portions of the home, constantly reported strange happenings such as items coming up missing and strange noises being heard. Most commonly, the lids to their paint cans would often come up missing. It sounds odd but I have often heard of mischievous spirits doing specific things that would have you scratch your head. Of all things, why mess with paint can lids? I have heard of spirits who leave pennies lying around a home and radios always tuning to a particular station. In one case, we were contacted by an elderly woman who said that of the twenty or so medications she was on, the only one that was coming up missing was her pain medication. Unfortunately, her house was not haunted and she had a “pill head” for a teenaged grandson but that’s a horse of a different color!
The current owners are quite adamant that the Logan Mansion is haunted. They have continuously kept a journal, annotating any strange experiences encountered by themselves or visitors to the home. In addition to Theodora, the owners strongly feel that the mansion is also haunted by other spirits but they have been unable to pinpoint just exactly who they are. Regardless, the spirits have all been mischievous, never posing a threat to anyone. The homeowner has reported that in difference instances, a music box started playing for no apparent reason, silverware has moved on its own, and she was once locked out of the screen door. She explains that on several occasions when she went outside, the door would slam and the hook and eye lock would engage. Strongly feeling the encounters were due to Theodora, the owner would vocally scold her out loud. The activity subsided for a while but then picked back up later on.
Several years ago, we were fortunate enough to be the first group allowed inside the Logan Mansion to conduct a formal investigation. Despite our eagerness and inaugural visit, we walked away with no significant evidence to confirm that the home was haunted. Obviously, this did not negate the years of claims or the belief that there is activity at the Logan Mansion. Simply put, on our visit, we captured no substantial evidence. Since our visit, paranormal groups from all over have visited the mansion in the attempts to capture their own proof of spiritual activity. I used to get irritated when groups seemed to ride our coattails, following behind us and investigate every location we have been to but then I reminded myself, “Who am I to be offended?” It’s not as though I own these locations nor do I have a no-compete contract with them. Imitation is the greatest form of flattery so I guess if a location we first investigated is sought by many of the other groups then I suppose that is a good thing, showing that if Louisiana Spirits investigated here then it must be worthy enough to check out. Today, the Logan Mansion is a regular stop on any haunted tour of the downtown area and, at the end of the day, if the attention we initially brought to the home is what still garners them publicity, visits and acknowledgements, then that’s all that matters. When the smoke settles, the preservation of our historic locations is paramount.