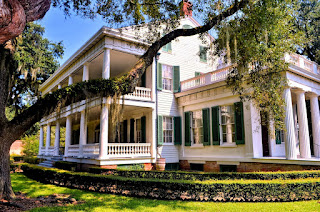 
As small as St. Francisville may be, it can definitely boast about two things. Not only is it home to the most haunted plantation in the south, it may very well have the most intact domestic plantation complex around. As with the previously mentioned Oakley Plantation, Rosedown Plantation is also often overshadowed by the illustrious Myrtles. However, with its beautiful gardens and original furnishings, Rosedown is as authentic as they come should one want a true depiction of antebellum times. According to the staff, approximately ninety percent of the home’s furnishings are original to the site and were imported from Philadelphia, New Orleans and Europe.
Construction of the home began in November of 1834 by socialites Daniel and Martha Turbull. Daniel was known as quite a wealthy individual, already owning several other plantation homes such as Catapla, Hazelwood, Middleplace, Styopa, Grove, Inheritance, Woodlawn and De Soto. Unlike many of the time who obtained their land via Spanish grants, Turbull received his by a group of seven purchases made from the 1820’s through the 1840’s. When the home was finally complete in May of 1835, it sat on a total of three thousand four hundred and fifty-five acres, primarily consisting of cotton. The home would be called Rosedown, based on a play that the couple had watched while on their honeymoon in Europe. Martha would also become quite the gardener, having an immense love for flowers. Martha began extending on a pre-existing garden on the property by purchasing camellias, azaleas and other plants. What began as a small flower bed ultimately blossomed into a gigantic twenty-eight acre garden that still sits on the grounds today. With the demand to maintain and care for such a vast amount of land, the Turbulls turned to the aid of roughly one hundred and forty-five slaves they owned to tend to the property. According to an 1860’s census, in addition to Rosedown, Turbull owned Styopa Plantation, with two hundred twenty-five slaves and Hazelwood Plantation with seventy-four.

Together, Daniel and Martha would go on to have three children; William, Sarah and James Daniel. James, the youngest child of the three, would tragically die from yellow fever in 1843 at the tender age of seven. William would go on to marry Caroline Stanwick Butler in 1853 and was the granddaughter of Martha Washington. The couple would have two children by the name of William Jr. and Daniel. Tragedy would once again strike the family in 1856, when twenty-seven year old William would drown in the Mississippi River when his small boat would capsize from a passing steamboat. The one surviving child, Sarah, would go on to marry James Bowman of the adjacent Oakley Plantation. They would have a staggering ten children and would move in to Rosedown, with Daniel and Martha retreating to a small wing at the rear of the home. I never could imagine how people of this time were able to survive with so many children. Not only for sheer medical reasons, as it’s amazing a woman could birth so many children during that time and survive, but the headache of so many kids. Hell, with three, I want to pull out my hair! The concept was pretty clever when you think about it; have plenty of kids and put them to work when they are older.
Daniel would pass away in 1861 with Martha following suit in 1896. Rosedown would now be solely owned by Sarah and James. The house would begin to deteriorate due to time and damage from Union troops passing through the area. After Sarah's death in 1914, her four unmarried daughters, Corrie, Isabel, Sarah and Nina, took over the plantation. In the 1920’s they decided to open the house to tourists, showcasing years of family history. After Nina's death, who was the last surviving child, Rosedown passed to her nieces and nephews, who decided to sell the home. In 1956, Catherine Fondren Underwood purchased Rosedown and began an eight-year, ten million dollar, restoration of the house and formal gardens. The Underwoods returned Rosedown to function as a working cattle farm, and restored the old home to its former beauty. They opened the house for tours in 1964. Today, the home is deemed a National Historic Landmark and is available for daily tours where visitors can visit not only the main house but the historic gardens, twelve historic outbuildings and the three hundred and eleven remaining acres.
As one walks through the gigantic six hundred and sixty foot tunnel of ancient oak trees, you may get the sudden urge to stop and smell the roses. If you do so, prepare to bring a lunch, as you will be there for quite some time as you make your way through all twenty-eight acres of gardens. As you wander the lush and fragrant grounds and get the sudden feeling that you are not alone, it’s very possible that you may not be! For years, staff and visitors alike have encountered the ghost of a young man and young boy. Many feel that the hauntings at Rosedown are primarily the spirits of a young William and even younger James Daniel, both of whom died sudden deaths. Their spirits are said to be of the playful sort, nonchalantly interacting with the living in such subtle ways as to simply say, “We’re here!” Much of the activity seems to resemble more of a poltergeist nature, as lights often turn off or every one of the lights in the home are turned on when no one is around. Staff has claimed to lock up and activate the alarm system for the night. When they return the next morning, they have found that pieces of furniture have moved on their own throughout the house. Due to their sudden deaths, many feel that James and Daniel have stayed behind to oversee the home they so loved and were taken from too soon.