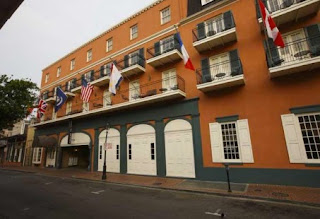 One of the most helpful pieces of advice I can give to first-time visitors to the French Quarter is that there is no short supply of places to drink, places to eat and places to sleep. I purposely placed those locations in a specific order; as most first-timers prioritize in that manner. “Give me something to drink, something to eat, then if I get tired, somewhere to sleep!” If you do decide to partake in burning the midnight oil and end up needing a place to stay, fear not, as every block contains at least one place to rest your weary head. What’s unique about the inns in the French Quarter is that each one has quite a long history attached to it. These are not quite your everyday “no-tell motels”, if you know what I mean, where a $10 deposit garners you a can of Lysol!
The Audubon Cottages on Dauphine Street are a perfect example of these great little historical inns. These intimate homes were built just after the two great fires destroyed most of the area in the late 1700’s. The grounds consist of seven beautiful and cozy homes, all surrounding a courtyard containing what many claim is the oldest swimming pool in the French Quarter. Fortunately, it is cleaned regularly, as one could only fathom the stories that would culminate from the area’s oldest swimming pool!

Each cottage is uniquely themed to various events in the area’s history. Cottage one is known as the Audubon Cottage, as it once served as the temporary home to the famous naturalist and painter, John James Audubon. It is in this small home where Audubon placed the finishing touches on his
very famous Birds of America book series in the 1820’s. The series serves as a beautiful pictorial depiction of bird species in the United States.
Other cottages on the property, specifically cottages two and four, are home to slightly different themes. Although beautiful in design, these two homes are said to be haunted by the ghost of a Confederate soldier. He is said to have a fondness for country music, as the radios in these rooms often turn on by themselves and always manage to tune in to a country radio station. Disembodied voices and strange shadowy figures have also been reported here.
The cottages are part of the adjacent Dauphine Orleans hotel. The hotel and the Audubon Cottages combine to form the large hotel property that sits there today. The hotel’s bar, May Baily’s, was used as a legal bordello as early as 1857, as the area was part of the famed Storyville. For more information on Storyville, stand by, as we will get to that in due time. We had the privilege of investigating portions of the hotel and the cottages several years ago. As with many investigations, spirits do not act on command and we did not obtain anything anomalous other than a few unexplainable electromagnetic spikes. Still, that is not substantial enough proof to officially label our investigation as successful.
As I mentioned before, it is very hard to pinpoint the origin of many hauntings in the French Quarter, primarily due to the two previously mentioned fires in the late 1700’s that basically erased much of the history books. The Audubon Cottages are a prime example, as no one knows the source of the ghostly Confederate soldier. With buildings being built atop the ashes of other buildings, the entire French Quarter is like one big grab bag for paranormal activity. If a building is not haunted from a tragic event that took place there, it may be from a pre-existing establishment. Even that could not be the case, as anyone who has visited the area can attest; buildings are literally built on top of one another. So in all actuality, my most professional statement I can give regarding the origins to much of the French Quarter hauntings is simple: Who the hell knows!