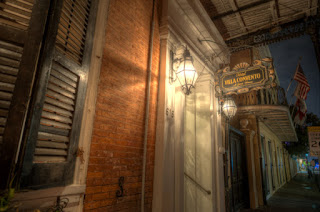 One of my favorite songs of all times is The House of the Rising Sun. Originally written as early as the sixteenth century, this folk ballad is said to represent a Soho brothel. There have been many versions of this great classic sang in various genres. The song is most known by the 1964 version recorded by Eric Burton and The Animals, tweaked to incorporate what many feel is a New Orleans brothel. Along with other songs such as St. James Infirmary, every time I hear this song, I instantly have the urge to take a drive to New Orleans. Anytime I am in the city and happen to visit one of the many piano bars in the area, I make it a habit to drop a few bucks on the table and request this quintessential New Orleans song.
For years, there has been a huge debate as to whether or not there was an actual establishment in New Orleans known as the House of the Rising Sun. Many feel the location was imaginary while others feel it was a brothel sometime during the 1800’s. A short lived Conti St. hotel in the 1820’s, a building known as the "Rising Sun Hall" in the Carrollton neighborhood and a saloon on the 100 block of Decatur Street have all been rumored places of this mysterious house of ill repute. Bizarre New Orleans, a guide book on New Orleans, asserts that the real house was at 1614 Esplanade Avenue between 1862 and 1874 and was purportedly named for its madam, Marianne LeSoleil Levant whose name translates from French as the rising sun.

Another location rumored to be this legendary home is currently known as the Hotel Villa Convento. The land was originally purchased in the 1830’s from the Ursuline nuns by Jean Baptiste Poeyfarre. Several years later the home was then sold to Octave Voorheis who would ultimately lose the house due to financial issues around 1872. The house would go through numerous hands as a private residence until 1946 when it was converted into apartments and some say, parts were used as a makeshift brothel. It wasn’t until 1981, when the home was finally transformed into the present day hotel.
Many visitors to the hotel feel that it is haunted by a former Madame who wanders through the building, knocking on doors, as if to tell her working girls, “time’s up!” Guests have heard the sounds of children laughing and talking in areas where no one else was present. In a more chilling encounter, guests have awaked in the middle of the night to find the apparition of a women staring at them. When they jumped from their beds, the apparition would vanish.
In my honest opinion, I often wonder if the actual House of the Rising Sun ever even existed. Facts can be misconstrued so much over such a long period of time, it is hard to know for sure. Of course, this part of the city was full of brothels during 1800’s and early 1900’s but to know of one that actually operated under this name, no one may ever know for sure. The song may simply represent an era in time where traveling young men, trying to find their place on earth, experience many dark encounters in even darker parts of society. Whatever the case may be, the house itself will probably remain shrouded in mystery but the song sure does rock!