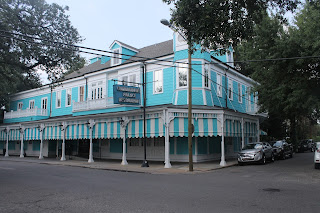 Of the near endless number of great restaurants in New Orleans, none is finer, older and more well-known than Commander’s Palace. If you’re in the search of five-star dining at its apex, this restaurant is the place to go. The beautiful design of the building equally matches its extensive cuisine and wine list. Mind you, this isn’t the place you want to show up wearing flip flops and clothes you just finished digging a ditch with! Arrive well dressed and you will be rewarded with some of the best food you can possible find in the Crescent City.
Commander’s Palace was built in 1880 by Emile Commander. Built on the corner of Washington Avenue and Coliseum Street, the building was initially used as a small saloon. Ironically, it is built right across the street from Lafayette Cemetery number one, said to be the oldest and most haunted cemetery in the city. Within a couple of years, the bar would quickly transform into a fine dining restaurant. By the early 1900’s, the restaurant had quickly become one of the hot spots for gourmet lovers and well-known chiefs.

Sometime in the 1920’s Commander’s Palace was sold to Frank G. Giarratano. Here, he and his family lived on the second floor of the restaurant while business carried on as usual downstairs. In 1944, Frank and Elinor Moran bought Commander's Palace and continued on with the tradition of  running a high-quality restaurant. By the 1970’s, Commander’s Palace would be sold to the Brennan’s, who still own it today.
Throughout its many years in operation, celebrities and dignitaries alike have dined here. Famed chef’s such as Paul Prudhomme and Emeril Lagasse began their illustrious cooking careers by mentoring here at Commander’s Palace. Their legendary skills are an example of the great quality that comes from the restaurant’s kitchen.
In terms of hauntings, Commander’s Palace is not tremendously active, yet this does not mean the restaurant has not had their fair share of ghostly encounters. Of course, only in New Orleans, would a building with a "little activity" is not given a second look. Most people feel that the main spirit that resides here is the ghost of the late Emile Commander. Even to this day, he continues to oversee his pride and joy, ensuring that top-notch service is still offered as when he was alive. According to staff, they have also seen the apparition of a young unknown girl in a white dress. She has often been seen wandering around the second floor and coming down the staircase. Could she be attached to the building in some way or simply a spirit roaming around due to the adjacent cemetery?
If you are ever privileged enough to dine at this grand restaurant, consider yourself privileged. I, myself have not had the honor due to lack of funds and appropriate clothing but should the day come, you can bet your “biscuits” (my ongoing ode to the Biscuit Palace) that I will be there, sipping on their signature drink known as the Bloody Bull and enjoying their seven course meal. Hell, I may even sneak in a voice recorder in my suit just to catch some paranormal evidence of my own. I’m sure no one would even notice!