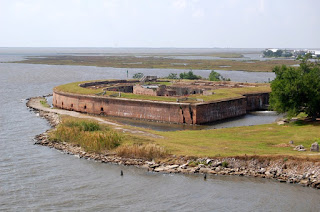 
One thing that we have learned so far is that the waters surrounding New Orleans have been the target of many military attacks throughout the years. After the United States barely survived the Battle of 1812 against the British, President James Monroe ordered that a massive fortification of the southern waterways and coasts be erected. Construction of what would be known as the Third System fortifications began in 1816 and was officially complete in 1867. These forts consisted of several brick and masonry structures built along the coastal region and were able to protect New Orleans and the Mississippi River from any potential air or sea attacks.

Fort Pike, originally known as petit qoquille, or little shell, was one of the first of these Louisiana forts to be built. Completed in 1826, Fort Pike was named for the explorer and soldier General Zebulon Montgomery Pike who had explored a large portion of the Louisiana Territory. His explorations even branched into the Rockies, hence the name Pike’s Peak in Colorado Springs, Colorado. It was a massive structure, able to house four to five hundred men and was equipped with thirty-three thirty-two pound cannons, fifteen twenty-four pound cannons, four thirteen inch mortars and two ten inch mortars. Together with Forts Maccomb, Jackson and St. Philip on the Mississippi River and Fort Livingston on Barataria Bay, these fortifications protected New Orleans and the coastal land from any future attacks.
The fort served as several stations during its years of active duty. During the Seminole Wars in the 1830’s, Fort Pike served as a staging area for many troops on their way to Florida, and also served as a collection point for hundreds of Seminole prisoners and their black slaves who were being transported to Oklahoma. To turn the fort into a makeshift prison, cannons were removed from some of the casemates to convert them into cells. Anytime a building is ran as a prison for any given reason, one can only imagine what assaults and other acts of violence may have taken place.
On January 10, 1861, a detachment of the Louisiana National Guard, under the command of Lt. Merriman, seized the fort just before Louisiana joined the Confederacy. When Union forces captured New Orleans in 1862, the Confederacy had no choice but to evacuate Fort Pike. The Union then regained control of the fort, using it as a base for raids and also for the training of the United States Colored Troops. Fortunately, during its years of operation, Fort Pike never witnessed a single shot fired. It was officially abandoned in 1890 and it wasn’t until 1972, when it was placed on the National Register of Historic Places. The fort was heavily damaged during Hurricane Katrina in 2005. Luckily, the site was repaired and is open to the general public, allowing visitors to take a step back into time.
Despite the fact that there were no actual battles fought here, this does not negate the reports of paranormal activity encountered here. Along the walkways, visitors have heard the disembodied sounds of military boots marching on the bricks. Many people feel that the source of these sounds is from the spirit of a young Sergeant, said to have never left his guard post. Others feel that the fort is haunted from the several years of being a prison. It was no secret that the prisoners here lived in very harsh conditions and it is not out of the ordinary for many of them to have died from neglect, infection and abuse. Unexplainable cold spots and spikes in electromagnetic energy have been detected within the cells.
No one is quite certain as to the origin of these strange ghostly encounters at Fort Pike. I never quite could understand how someone could be so attached to their job they cling to it even in the afterlife. Hell, I can barely stand my regular forty-hour work week. I yearn for the weekends and loathe their conclusions. I can assure you, if I am ever found haunting my place of work, call a priest, as my soul is truly locked in eternal damnation and needs to be set free!