People will often ask me about the different temperaments of spirits. Of course, if you were to base your beliefs on any given paranormal “reality” show (I use that term very loosely), you would think that every other haunted home is possessed by a full-blown demon. Such cannot be any further from the truth, as a demonic haunting is actually a very rare encounter. My theory on spiritual behavior is quite simple. You have friendly people and you have assholes! When these people die, not much change and their personalities remain the same, leaving you with friendly spirits and not so friendly ones. A true ill-tempered spirit can often be easily confused with an entity much more serious than what it is. Fortunately, this is also not a very common thing to encounter as majorities of the hauntings we have encountered have been friendly or simply residual energy etched in time. Our next location contains what many feel is a very friendly spirit.
The Hermann-Grima House now sits as a historical museum on Saint Louis Street and has been meticulously restored to its original appearance. The home was built in 1831 by William Brand for Samuel Hermann. He lived there for several years until financial hardships due to the crash of the English cotton market caused him to sell the home. In 1840, the house was sold to civic leader Judge Felix Grima and his wife Adelaide. Adelaide died shortly thereafter in the home. The home was handed down to several generations of the Grima family until 1921. In 1922, the home was purchased by the Christian Women's Exchange, a local non-profit group. They operated the home as a boarding house, tea room and consignment shop for young woman until the 1970’s, when the home was turned into the present day museum.

The museum has been painstakingly restored to showcase a true depiction of nineteenth century Creole living. From the furniture, to the tools and to the artwork, walking into the Hermann-Grima museum is like stepping in to a time machine. October is an especially unique time to visit the home, as it is transformed into an accurate depiction of a residence during mourning. During the 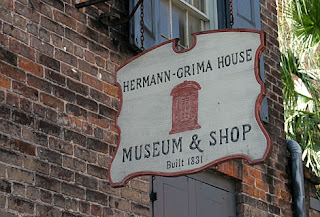 1800’s it was a regular practice to use the nice homes in the area as a makeshift funeral home. October is the chosen month for this décor, not simply due to Halloween, but this is also the month that Adelaide Grima had passed away.
As one might expect, the primary resident haunt is said to be the spirit of Ms. Adelaide. She is described as a very loving and caring spirit, often seen during the month of October, presumably to admire those who mourned her death. Guests have reported walking into their rooms to mysteriously find rose petals and lavender strewn around their rooms as if Ms. Adelaide is perfuming the sleeping quarters. Staff has reported that on chilly mornings, they have arrived to find that the fireplaces have been lit with no guests claiming to have done so.
If haunted houses were rated on the tender loving care of their ghosts, the Hermann-Grima House would be at the top of that list. Guests have reported their encounters to almost have a soothing effect, as the spirits that reside here are very attentive and caring for their guests. If you want demons, watch the next episode of “John Doe Paranormal”, but for a legitimate haunted encounter that may actually leave you all warm and fuzzy feeling inside, check out this place!