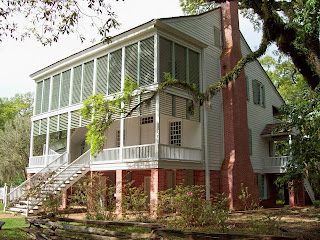 
Often overlooked due to the mass notoriety garnered by the Myrtles, our next location may not get the haunted attention it deserves. Tucked away about two miles from the Myrtles is Oakley Plantation, which helps in making up the Audubon State Historic Site. The land that the home sits on began as a Spanish land grant in 1796 that was given to Ruffin Gray, a successful planter from Natchez, Mississippi. If that name sounds familiar, you’re not alone. From the information that I have gathered, Ruffin is the father of Ruffin Sterling Gray who would purchase the Myrtles in 1834. On his newly acquired land, Ruffin would begin construction on the family home. Early into the job, Ruffin would pass away, leaving behind his two children and wife, Lucy Alston. Lucy would ensure that the family home was completed, as she remarried a Scotsman by the name of James Pirrie. The two would birth a girl, Eliza, who was born on October 6, 1805.
During this period in time, it was customary for planters to travel to New Orleans in the hopes of exposing their families to a more eclectic form of culture. I am sure these excursions were also a chance for young women to search for a successful husband in the big city. During the spring of 1821, Lucy Pirrie would make a trip to New Orleans and meet the well-known James Audubon. At the time, Audubon was working on his famous Birds of America paintings and literature and was in need of a steady paying job. Lucy would offer Audubon employment by returning to their home in order to tutor her young daughter, Eliza. The proposal was simple; Audubon would receive fifty to sixty dollars a month plus room and board for himself as well as his thirteen year old protégé, John Mason. In exchange, he had to tutor Eliza half of his time, while the other half could be spent roaming the grounds and doing as he wished. Audubon would stay at the Oakley House for about four months. During this time, he would create thirty-two of his famous pieces of artwork and gain an immense love for the West Feliciana land.

The land would consist of the main two-story home, gardens, slave cabins, barn and outdoor kitchen. The compound would appropriately become the Audubon State Historic Site, paying honor to the famed artist. Today, the home is open for tours and the grounds host various festivals and events such as Civil War reenactments. The rooms of the main home have all been painstakingly remodeled to reflect the appearance of when James Audubon stayed there along with being decorated with several pieces of his artwork.
Once the sounds of tourists have died down and staff has gone home for the day, life continues to breathe through Oakley Plantation in the spiritual form. Some of the reports of paranormal activity have been the sounds of disembodied footsteps and voices along with the apparition of a young girl which has been seen waving from the upstairs window. In one instance, one of the tour guides reported the feeling of being hugged while another employee reported seeing the spirit of a young boy standing near one of the beds. Several visitors to the home have reported seeing a woman with three young children sitting in a rocking chair. Other accounts of events told to us by staff include doors opening and closing on their own, objects coming up missing and other strange sounds being heard throughout the home when no one else is present.
Several years ago, we were fortunate enough to investigate the Oakley Plantation. We were determined to find answers as to who exactly haunted the home, as there had been no reports of any tragic events taking place there. We arrived around 7:30 in the evening and were given a tour of the grounds and home by two of the daily tour guides. Once complete, we began setting up our equipment, starting with eight infrared cameras and two DVR systems. We focused our attention mainly on the second and third floors, where most of the activity had been reported. After everything was set up, we split into three groups. The first group began by investigating the two slave cabins and barn that are still on the property. The second and third groups made a sweep of the house with two other guides who knew many of the home’s stories. Additionally, both had their fair share of ghostly encounters at the home and were able to assist in pinpointing the historical hot spots. Later that evening, as the investigation appeared to be calm, one of the investigators detected a sudden unexplainable cold spot. At the same time, another investigator felt as if they had been touched. We focused our attention in this area, increasing EMF sweeps and communication attempts. As sudden as the activity appeared, it quickly dissipated. The rest of the night went uneventful, so we decided to wrap things up.
Review of all audio and video resulted in an interested EVP of what sounded like a single strum on a guitar and an individual humming. The sounds of musical instruments are not uncommon in electronic voice phenomena, especially when dealing with residual energy. The audio clip is quite interesting as it clearly sounds like a guitar. Obviously, no one was honing their guitar skills that night and I cannot think of anything else that could be mistaken for that sound. We are very interested in conducting a follow-up investigation of Oakley Plantation, as we feel there are many unanswered questions here. I think that whatever resides at the home is predominately residual in nature, simply going through the motions of years gone by. Could the hauntings perhaps simply be due to a former resident along with young children who are forever attached to their home? Pay the great folks of Oakley Plantation a visit and judge for yourself!