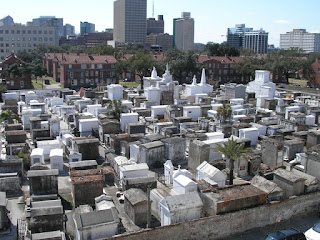 As unique as New Orleans food, architecture and overall way of living, so are its cemeteries. Used in many types of artwork and for backdrops in numerous movies, there is definitely a certain lore that cannot be found anywhere else. Huge ornate crypts lined in rows seem to come alive at times, with a unique amount of personal touches often added to them. Obviously, the wealthier the family, the more luxurious and decorative the tombs were. Above ground burials in New Orleans are the basic norm. Most people think the sole reason for this is due to the low-lying land, as no one wants to see the deceased pop out the ground after the first good flood. Although that is a major reason, this method of burial is equally associated with French and Spanish tradition. 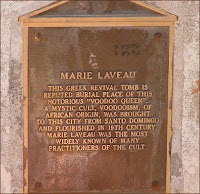 Strolling through any given cemetery in the city, it appears that there is no such thing as a new cemetery or even a new grave for that matter, as everything seems to be so old. One of the reasons for this is, quite simply, the fact that they are all that old! Burial land in New Orleans lessens while people continue dying. As time goes, the gap grows! Most families have been forced to recycle most tombs, which is another advantage to having above ground crypts. Poor old Grandma Edna has been at rest for forty years. She was loved, she will be missed, but she needs to scoot over and make room for Uncle Normand. Bluntly put, but it is true; the older remains are often shoved down a back compartment to allow a new casket to be put in its place.

With so much talk about these centuries-old cemeteries, you may wonder which is the oldest one in the city? Fortunately, we have just mentioned the St. Louis Cathedral so it should be fresh in your mind. A few blocks away rest its counterpart, St. Louis Cemetery Number One. There are a total of
three St. Louis Cemeteries in the city, obviously this one being the oldest, being established in 1789 and was used to rename the former St. Peter Cemetery. So in all actuality, the cemetery probably dates back closer to the early to mid-1700's. St. Louis Cemetery Number Two is located about three blocks from the first one and was erected in 1823. Finally, the largest of the three, St. Louis Number Three, sits about two miles away and was opened in 1854.
Although the smallest and oldest, St. Louis Cemetery Number One is the most famous and popular amongst tourists. It is a common stopping point for haunted history tours, cemetery tours and carriage rides. The gates are open during the day and normally close fairly early in the evening. I highly recommend that you do not traverse this neighborhood alone or when the sun goes down! Undoubtedly, the cemetery is most known as home to the supposed burial site of the infamous Voodoo queen Marie Laveau. Finding her grave is quite simple. As you enter the main gate, immediately take a left and the crypt is only a few feet away. It is easy to spot, as there is a small placard noting the life of Laveau and the entire tomb is covered with groups of three X's and anointed with various trinkets and gifts. Legends tell that if you visit her grave, make a wish and draw three X's on it, your wish will come true. I have often heard the rumor that this may not be the actual burial spot of good old Marie. Some say it is a few tombs further against the far west wall. Here you will see a less ornate grave with equal markings and trinkets. No one may ever know her true burial spot, so for many of the unknowing, they visit and decorate both. I guess when you are wanting to win the lottery or get a new job, it pays to play it safe!
Other notable individuals that are buried here are Etienne de Boré, the first mayor of New Orleans,  and the familiar names of Bernard de Marigny and our poor chess champion Paul Morphy, who we have mentioned on numerous occasions so far. St. Louis Cemetery Number One is also the site where people feel that the infamous Delphine LaLaurie is secretly buried. As mentioned earlier, in the 1930's a copper plate was found here in Alley Four by caretaker Eugene Backes, mentioning a particular Madame Delphine LaLaurie who had died in 1842.
For obvious reasons, official nighttime investigations have not taken place here nor or they allowed. I, for one, have no urge to attempt to be anywhere near this part of town in the wee hours of the morning. Never mind the fact the most powerful Voodoo queen's soul rest here along with possibly the spirit of one of the city's most evil women. It's the living I am worried about! Whether or not the cemetery is haunted, we will leave to the daytime tour groups to decide. Regardless, it was only necessary that I devote a chapter to such a historic cemetery. Visit during the day, enjoy the epitaphs, take all the pictures you want and get the hell out of Dodge unless you would like to join the cemetery's current occupants!