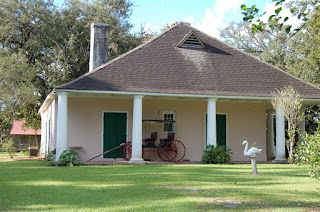 
Like many of you, I have always liked to travel. I never could quite understand how my father, over sixty-five years of age, has never left the state, nor has he had the desire to do so. There is just way too much out there to see and explore that is not in our own backyards. I’ve always been the one that enjoys the strange, off-the-wall roadside attractions such as the “World’s Largest Ball of Twine” or the “Amazing Four Headed Pig”. You know that sort of stuff. Unfortunately, many of these places are humorously a let-down, as when you show up to find this swine specimen, you are treated with an obviously fake stuffed creature or something similar. Remember guys, all that glitters is not gold. Take this blog for example! I bet you were expecting a true monotone encyclopedia of sorts, not some crazy Cajun talking about the Biscuit Place and clubs for well-endowed men!
As I was saying, taking road trips, you can definitely find some strange things. One such location is an extremely old house in Saint Rose with quite a pair of oddities. Not only does the LaBranche Plantation Dependency house a bathtub that was once owned by Zachery Taylor, the twelfth President of the United States but it is also the burial site of a horse said to have been owned by Hitler himself. Now, if that isn’t a reason to wake up the kids and pull over, I don’t know what is!

The dependency home served as a garconniere, or an antique bachelor pad. The home, built in 1794, is a mere shell of the grand LaBranche Plantation that originally stood on the property. The plantation itself was built in 1765 by Alexandre LaBranche, descendant of Johan Zweig of Germany. 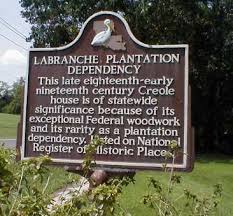 It is rumored that the name would eventually change to LaBranche in a comical way. Supposedly, Johan Zweig, upon his marriage, could not write his name. French officials attempted to translate the German name. With the name Zweig, which sounded like “twig”, became “branch”, hence the name LaBranche. Take it for what it’s worth, but I have heard stories even more insane. For example, the small of Bunkie is said to have acquired its name from a young girl who could not pronounce the word “monkey” when she saw one at a traveling circus! I don’t write the history books, I just repeat what I hear!
The grand plantation, said to have been a beautiful home, was ultimately destroyed during the Civil War, leaving behind the current dependency home and a few slave quarters. The only thing that even remains, remotely annotating that a plantation stood here is a long row of historic oak trees, marking the once-upon-a-time entrance. In 1902, the dependency home would be sold to Olidé and Marie Perilloux Cambre who would eventually sell it in 1948 to Dr. C. Walter Mattingly. In 1983 the home would be sold to Sal Lentini, long-time police chief of Kenner. He would open up the home for tours, until his death in 2010.
Unfortunately, the home is no longer available to tour but if you were to wander around the property you would notice a small stone with a bronze plaque that reads, “Nordlicht 1941-1968 Double Derby Winner and Classic Sire.” The plaque commemorates the life of a prized chestnut thoroughbred whose named translates into “Northern Light.” According to an article by Ned Hémard, “This fine specimen raced the Nazi circuit in 1943 and 1944 and won the German and Austrian derbies. Undefeated, Nordlicht was named horse of the year in 1944, with his image featured on a German postage stamp. The U.S. Army eventually acquired the famous Third Reich thoroughbred as a spoil of war and brought him to the United States.” He was eventually purchased by Dr. Mattingly and he would live out the rest of his years on the plantation property.
Over the years, several strange occurrences have taken place at the LaBranche Dependency Home. Some people have reported strange light anomalies in and around the old home, said to be the energy from spirits who once lived on the property. As far as the land dates back, there is no telling what sorts of undocumented history lays buried by time. One burial that is said to have been touched is that of Nordlicht’s, which is rumored to have been disturbed by workmen in 1980. Ever since the incident, several people have reported seeing the apparition of a ghostly white horse. As the horse approaches them, close enough to even touch, he suddenly vanishes into thin air!
As we have learned up to this point, the idea of animal manifestations is not as crazy as one may think. The idea of animal spirits seem completely reasonable to me. If ghosts do exists, as we are all made of energy, including animals, then why can’t the residual energy of these animals also remain? I am completely fine with this idea and think that it is quite touching to know that we may be visited by long lost pets from the past. Ghost spiders, on the other hand, are a different story! Fortunately, I have no proof they exists!