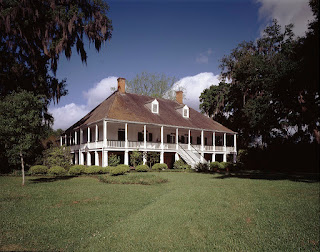 
Now that we have finally made it through the wild city of New Orleans, hearing some of the most gruesome and off-the-wall stories imaginable, what could possibly be left? With many states, covering this many reportedly haunted locations would be squeezing the sponge dry. However, we are in Louisiana and we are only starting to scratch the surface of all that is strange, weird and unknown. We now move from the bustling streets of Bourbon to the calm and serene waters of False River in New Roads.
False River is a beautiful ten and a half mile oxbow lake that once served as the main channel to the Mississippi River for the area until it was cut off in the 1720’s when seasonal flooding cut a shorter channel to the east. Today, the area is an outdoorsman’s dream, being home to great fishing, incredible water sports and multi-million dollar homes. As you drive along Highway 1, admiring the waters to your left, you also may be intrigued by some of the older homes to your right. As you continue to drive, you are amazed at the huge amounts of peat moss that hang from the centuries-old oak trees. The moss adds quite a unique touch, causing the trees to appear as if they are melting or, better yet, weeping.

One historic home along this scenic route truly sticks out as the quintessential French-colonial home, appearing as though it just sprung out from a painting. Parlange Plantation is nearly as old as the waters that it sits across from, being the oldest structure in the vicinity. The home was built in approximately 1750, while some say the completion date was as late as 1754. This Creole mansion was built by the Marquis Vincent de Ternant on ten thousand acres of land that was obtained through a French land grant and quickly grew into a successful indigo plantation. When de Ternant died in 1757, his son inherited the plantation. It would eventually fall into the hands of de Ternant’s grandson, Claude, who would change the crop of choice to cotton and sugarcane.
Although Claude followed in his grandfather’s footsteps by becoming financially successful, he was stricken with tragedy at an early age when his first wife, Dorothee Legros, and their only child died during childbirth. After a short period of mourning, Claude felt the need to remarry and he
looked no further than within his own family, as he would eventually wed his second cousin, fifteen year old Marie Virginie de Ternant. The couple had three children: Marius Claude, Marie Virginie and Julie Eriphile. Some records show that a fourth child was birthed by the name of Henri who drowned in a nearby stream at a very early age but those accounts are unconfirmed.              Following Claude’s death in 1842, Virginie married a Frenchman, Charles Parlange, who served as a colonel in the French Army. The Parlange name would stick with the home, giving it its present title. Together they had one son, Charles, who became quite successful as a state senator, United States Attorney, Lieutenant Governor of Louisiana, Associate Justice of the Louisiana Supreme Court, and United States federal judge. The same couldn’t be said for the other children.
The bad luck of Claude seemed to be passed down the family tree of woe. While Virginie lavishly spoiled Marius Claude, possibly due to the guilt of tragically losing her first son, she was extremely strict on her daughters. The spoiled lifestyle and sense of self-entitlement would soften Marius, leading him on a wild path of alcohol abuse and fast living. He would die at the young age of twenty-five in 1861.

As sad as this story of Marius is, the events that happened to poor Julie are even more heartbreaking. Julie was in love with the son of a local successful plantation owner. Although this would have been more than adequate for the times, Virginie wanted more for her daughters, demanding that they only marry French Noblemen. Virginie would go to great lengths, ensuring that Julie would not see or communicate with her lover, going as far as assigning one of her slaves to monitor her at all times. What Julie did not know was that Virginie had been secretly arranging a young Nobleman to come down and sweep Julie off her feet, taking her as his bride. The news devastated Julie but it was a bit too late, as the young man had already arrived to take her hand in marriage. The day of the wedding came and Julie was in a state of shock and panic. Some say that Julie snapped and, either engulfed in suicidal tendencies or in a confused state, bolted from the scene and ran head first into one of the large oak trees on the property! The debate as to whether this was accidental or a suicide has gone on for years. Whatever the case may be, Julie died from her injuries and was officially free from her symbolic chains. As to add insult to injury, Julie is said to have been buried on the grounds in her wedding dress.
Her one remaining daughter, Marie, would go on to marry Anatole Placide Avegno and the couple would have several children together. One of which would become quite popular in the art community. Virginie Amélie Avegno would eventually move to Paris where she mingled amongst the highest ranks of Parisian society. She eventually became a socialite, married a French banker and would be most noted as the subject of John Singer Sargent's painting, "Portrait of Madame X".
By this time, Colonel Parlange had passed away and Virginie was all alone. She moved to Paris, still leaving Parlange Plantation in their ownership. When the Civil War broke out in 1861, Virginie heard of the news and returned to Louisiana to tend to her beloved home. Once she returned, she caught wind that the Union Army was approaching. With the help of her remaining son, Charles, the two placed approximately one third to a half million dollars in gold and silver coins in three wooden chests and buried them under the nearby gardens which were later destroyed by the Union.
As Union General Nathaniel Banks arrived at Parlange with his troops, Virginie greeted them warmly, inviting the officers to a huge feast and even allowed the general to sleep inside the house, while the soldiers were encamped in her formal gardens. Little did they know what treasures were laying beneath them as they slept. The Union Army would go on to use her home as their headquarters. Fortunately, due to Virginie’s tactfulness and slyness that made her so despised by the community, she ultimately would impress General Banks enough to spare her home from being destroyed.  Virginie would move to which ever direction the wind blew, as when Confederate General Richard Taylor and his troops later arrived, she offered them the same warm hospitality.
Once the war was over and the land was free of Union and Confederate forces, Virginie attempted to retrieve her chests of gold and silver. However, there was one big problem; only two of the three chests were there! To this day, the third chest has never been found. Could it have been secretly discovered by the Union Army, which may have been the reason they did not pursue destroying the home, or perhaps the treasure is still out there! I don’t know about you, but I have the sudden urge to go visit the property with a metal detector!
To this day, Parlange Plantation is still owned and operated by the direct descendants of Virginie Parlange. The home is open to tours, allowing you to admire the beautiful landscape along with ornate design of the plantation. As you focus on the ancient bousillage walls and solid cypress floors, keep an eye out for the spirit of poor Julie Parlange, as she is the most commonly seen ghost here. She has been witnessed running around the grounds, still appearing to be in a panicked state as on the day she died. Visitors claim she still wears her veil and long flowing wedding dress, sobbing as she wanders around the massive oak trees. I can only assume that her body is still not at rest, especially if the story is true that she was buried in the dress she was to wear for her wedding that she strongly protested. Poor Julie, a lost soul who was never allowed to join the love of her life, forced to live in eternity lost and alone.