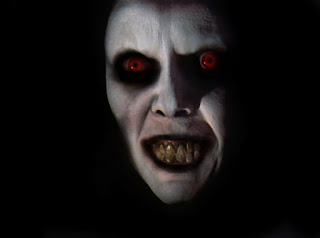 15. I Drink Your Blood (1970): In the genre of crazy cannibalistic hippie devil worshipper films, this one takes the cake! With special effects that would make a third-grader proud, our story begins with a motley crew of rebels performing a satanic ritual. From the bushes, a young girl named Sylvia watches on. She is discovered, captured and sexually violated. Once found, her vigilante grandfather attempts to seek retribution on the hellbound hipsters. Instead, he is given LSD and sent home in a raucous and quite high state. The only one still sober and sound is his young grandson, Pete. Of course, Pete now attempts to seek revenge but what does he do? Attack them? Shoot them? No, instead he kills a rabid dog, drains its blood, injects it into meat pies and feeds them to the unsuspecting Satanists! The rest is up for you to watch and find out! True cinema gold and proof that they don’t make them like they used to!

14. Tales From the Crypt (1972): It is an anthology film consisting of five separate segments, based

on stories from EC Comics. Our story begins with our five main characters touring an ancient catacomb, led by the Cryptkeeper, played by Ralph Richardson. Here, he brings them face to face with the manner in which they die. Sympathy for the victims does not last long, as you soon learn that each individual is quite the criminal, each with their fair share of dirty laundry. My personal favorite of the mini-stories is the fifth and final in the series titled Blind Alleys. Here, an ex-soldier cruelly operates a boarding home for the blind. After months of abuse, the patients decide to give the superintendent a taste of his own medicine. The classic opening is my favorite, which is simply a cemetery shot with Johann Sebastian Bach's Toccata and Fugue in d minor playing in the background.

13. Suspiria (1977): One of the classics by Italian horror legend, Dario Argento, Suspiria tells the tale of Suzy Bannion (Jessica Harper), an American ballet student, who has enrolled in the prestigious Tanz Dance Academy in Freiburg, Germany. Things immediately turn fishy as you know things just aren’t quite right. You quickly find out Suzy is in trouble, as she is caught in a web of murder, mystery and maggots! (yes, maggots!) With amazing, 70’s special effects and a soundtrack by Goblin, this is one of Argento’s best!

debuts the infamous Tall Man, played by the late Angus Scrimm, a creepy caretaker with mystical powers. Our hero of the film is 13-year old Mike Pearson who notices strange happenings at the Morningside Cemetery, operated by Tall Man. With the help of his brother, Peter, and ice cream delivering buddy, Reggie, the trio battle Tall Man and his mysterious dwarfed henchmen, hatched from former murder victims! With one of the greatest theme songs in my opinion, Phantasm is one of the best and started a classic series of films.

original Dawn of the Dead is one of my favorites. Written by two of the greatest: George Romero and Dario Argento, how can it not be? The country is being taken over by the walking dead. Helicopter pilot, Stephen, grabs his newly pregnant wife, Francine, from the television station she works at to flee from the zombie plague. They soon meet up with Stephen's SWAT member friend, Roger, and co-worker, Peter. Running out of fuel, the four land on the rooftop of the Monroeville Mall, which is still in operation today and even has a zombie museum! Seeing the potential in holding up inside of a fully-stocked mall, the four turn it into a a well-equipped home with food, water and weapons. They then continue to not only battle zombies but bikers who want to take over their safe haven. Introducing the special effects of a young Tom Savini, who would later become a legend in his field, Dawn of the Dead is the quintessential zombie survivor film that paved the way for many more to come.

9. Deep Red (1975): Probably Argento's finest, Deep Red, also known as Profundo Rosso, tells the tale of an unknown serial killer running wild in the city of Turin. After musician Marcus Daly, witnesses his neighbor being murdered, he attempts to find the killer that is wreaking so much havoc. With an incredible soundtrack by Goblin, clues lead Marcus through a weaving web of mystery with a finale that is sure to shock anyone.

supernatural horror genre. The film that sparked Sissy Spacek's movie career and also features a young John Travolta. A young schoolgirl with telekinetic powers is at the mercy of her holy-roly mother who seems to punish her for her husband leaving her. As Carrie not only battles her mother, her hidden powers and her classmates, she desperately tries to fit in with her colleagues. After endless tormenting from all angles, Carrie truly gets the last laugh that is more than satisfying for most viewers.

7. Last House on the Left (1972): The first film directed by the one and only Wes Craven, The Last House on the Left was a hell of a way for him to start! Before his days directing the murderous antics of the notorious Freddy Kruger, Craven pushed the envelope early in his career with this near snuff film. Heavily censored and often banned in many countries, The Last House on the Left is an exploitation horror film about two teenage girls who are taken into the woods and tortured by a gang of murderous thugs. The violence and rape is often too much for many but the ending is quite gratifying for those pulling for the victims.

stranded in the Nevada desert is brutally tormented and attacked by a group of inbred mountain folk. The action is intense and the scenes are ultra violent, but hey we are talking about horror movies, not Disney classics!

5. Jaws (1975): The Steven Spielberg film that made people scared to go into the water, Jaws is truly a classic. A giant man-eating shark terrorizes the fictional New England town of Amity Island. The only hero is the town sheriff, who is accompanied by a salty shark hunter and snarky oceanographer. Filled with classic quotes and unforgettable moments, I think everyone has seen this cinema gold.

components for such a horror film. (Isolation, fear, parasites and aliens...oh my!) As the commercial spacecraft Nostromo returns to earth the crew responds to what they think is a distress call from an alien ship. What they find is a warning message and a whole nest of nasty alien eggs. Of course, residual of the infestation boards the Nostromo and that's when the fecal matter really hits the oscillating device! Remember, in space, no one can hear you scream!

3. Halloween (1978): One of the greatest slasher films of all times, Halloween is John Carpenter's greatest creation. On Halloween night in 1963, a six-year-old Michael Myers inexplicably murders his sister and is committed. Fifteen years later, he escapes and returns home to kill again, all the while eluding his psychiatrist, Dr. Sam Loomis, who suspects Michael's intentions, following him back to Haddonfield. The escaped killer begins his trail of carnage quickly with unsuspecting teens. The death is great and the legacy known as Michael Myers is born.

favorite was tough, as it was a close call. Tobe Hooper's classic is said to be roughly based on notorious serial killer and necrophiliac, Ed Gein. As unsuspecting teens visit an abandoned home, they slowly become picked off by Leatherface and his cannibalistic family. Wielding his iconic chainsaw and dawning a mask made from human skin, Leatherface is the ultimate villain in my opinion.

1. The Exorcist (1973): When it comes down to the single best horror film, it is hard to dispute the one and only Exorcist. With some of the creepiest moments in all of film, there is nothing spookier than watching this classic alone in the dark. Said to be based on the true life events of a young Missouri boy possessed by the devil, The Exorcist tells the story of a young girl who makes the mistake of using a Quija board. Infestation begins with an imaginary friend known as “Captain Howdy”. The friendly figure soon turns demonic and young Reagan becomes possessed. Her estranged mother turns to a priest for help who decides that a ritualistic exorcism is the only option. In a film that will immediately make you “take yo ass to church!”, the Exorcist is as good as it gets in the horror genre.