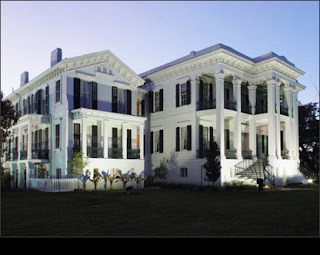 
After over two months of covering haunted locations, I would like to hope that you have learned a few things about the great state of Louisiana. You have been introduced to the state’s amazing history, our intriguing culture and my lame attempts at humor. If you have made it this far, consider yourself one of the select few that has been able to tolerate me for so long. For the others that turned their nose as soon as they read my misinterpretations of the Biscuit Palace and the Sausage Man’s House, they sure missed out on what I would like to consider a hidden gem of Louisiana haunted history, told in a very different tone. I have never liked books that read out like a college text book. I try to write like I speak, which doesn’t necessarily mean it is gold but it seems to work for some. Sometimes, it’s not how you finish the race, just as long as you make it to the end.
I have touched on nearly every single plantation in Louisiana, which conveniently all seem to have a haunted past. It’s really no huge surprise that the plantation-to-hauntings ratio is so high, as these homes are all so old with such a dense amount of history. Lots of blood, sweat and tears went into these homes, which is always a great place to start when culminating the birth of a haunting. In an era ravaged with war and disease, life expectancies were not very long whether the causes have been natural or other. While some plantations have stayed within the same family for years, others have been sold more times than one can remember. We have touched on the most famous, most haunted and most notorious plantations that Louisiana has to offer. It is only suiting that we save the largest plantation, not only in the state, but in the country, for last.

Nottoway Plantation sits on acres upon acres of sugarcane farmland in the small town of White Castle. It was originally built in 1858 by Virginian, John Hampden Randolph. After marrying his wife, Emily Jane Liddell, on December 14, 1837, the two would go on to have a staggering eleven children, with some documents stating a dozen! Obviously, this menagerie of munchkins could not be housed in a simple shotgun cottage so a grand home was dreamed up by Randolph. He began by acquiring land for the house in 1841. By 1860 he owned one hundred and fifty-five slaves and roughly six thousand two hundred acres of land. Around 1855, Randolph began compiling all of the building materials for the home. Slaves were used to make the thousands of handmade bricks as well as harvest, cure and plane the durable cypress. After consulting with numerous architects, he chose New Orleans native, Henry Howard's plan for a sixty-four room mansion.
Construction of Nottoway Plantation was finished in 1859 at an estimated $80,000, which is staggering for the times. Designed in the Greek Revival and Italianate style for which Howard was renowned, its most unique room is a semi-circular white ballroom with Corinthian columns and hand- 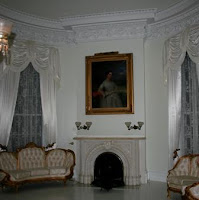 cast archways. The home is truly awe-inspiring, at a size of fifty-three thousand square feet and a total of three hundred sixty five openings, representing each day of the year. In total, the three-storied mansion has six staircases, three bathrooms, twenty-two square columns and what was once even a bowling alley for the children on the first floor. The bowling alley now serves as a museum and banquet area for guests at the plantation.
When Randolph would die in 1889, his wife would sell the home and land for one hundred thousand dollars. Needless to say, the plantation’s value today has slightly increased! Mrs. Randolph divided the sum equally amongst her surviving children. It is said that on the last day in her beloved mansion, Mrs. Randolph, dressed in black, mournfully walked around the empty home, personally closing the shutters on each of the decorative windows, symbolically closing such a huge chapter in her life. She died in 1904 at the home of her son, John Jr., in Baton Rouge. The Randolph's were both laid to rest at the Blythewood cemetery, along with other relatives, but the family remains were eventually returned to a private cemetery on the grounds of Nottoway in 2003. In recent years, a multi-million dollar renovation has been conducted, adding new buildings to the grounds while expanding upon the total acreage. According to their website, they have a total of forty overnight rooms, two honeymoon suites, a restaurant, outdoor pool, two ballrooms, several meeting rooms, lounge, fitness center, salons and tennis courts.
The sheer size of Nottoway may not be indicative of the level of paranormal activity, as the 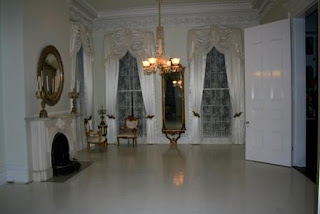 home is not known for being extremely active, but it definitely has enough to keep an occasional guest looking over their shoulder at night. While some feel that a majority of the hauntings at Nottoway are from either a former slave or carriage driver that was once employed there, most believe that the activity are simply the residual energies of Mr. and Mrs. Randolph, who continue to oversee the home they loved for so many years. According to one of the tour guides of Nottoway, Ms. Bryant, the staff continues to keep a running log of all of the ghostly encounters that have been experienced. In addition to the normal disembodies voices and singing heard by guests, Ms. Bryant recounts one particular event involving a blushing-turned-frightened bride. Referencing the bride, Ms. Bryant stated, "She was up on the third floor just admiring all the things in there, oohing and ahhing, and she said she felt a hand grab hers and squeeze it, and so she thought it was her husband (and turned) around to see what he wanted. And he was not there. He wasn’t even in the area. She became very frightened because she said it was distinctly a hand that took hers and moved it and squeezed it." In another account, one of the housekeepers was conducting her daily cleaning of one of the rooms. As she exited the bathroom, she noticed an elderly woman sitting on the edge of the bed, wearing a nightgown and a small night cap. As she pushed herself from the bed to stand, she vanished. The employee definitely felt that the spirit of Mrs. Randolph had just paid her a visit and I can assume that the guestroom was cleaned quite quickly thereafter.
In 2009, Louisiana Spirits was fortunate enough to be allowed inside the enormous home to investigate. Covering the plantation, grounds and cemetery proved to be quite a daunting task but we were able to pull it off with the aid of a few extra investigators, cameras and other tools of the trade.  During the night, as two investigators were walking from the main house to the front office, they heard the very distinct sound of a bell ringing, originating from the front gate area of the property. 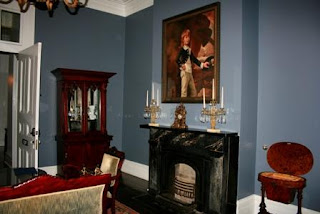 They both immediately changed their direction and walked towards the area that they heard the sound. After investigating the area and searching for a source, no explanation could be found for the strange sound. Unfortunately no voice recorders were running at this time to catch the sound. It’s almost as if spirits are aware when your recorders and cameras are running, as they will often wait until they are turned off to interact. It is sort of like when your car makes a continuous strange noise. As soon as you bring it to a mechanic, the sound stops, having the mechanic look at you like you’re crazy. As soon as you leave the repair shop, the damn sound starts up again.
Once the investigation was complete, to avoid a long late-night drive home, several investigators decided to stay the remainder of the night in several of the guestrooms. As one investigator was lying in bed, around five in the morning, he reported the area around his bed suddenly became freezing cold. As he got out of the bed, he noticed that the rest of the room was quite warm, except for this centralized cold spot. He laid back down, attempting to get a couple hours of rest. The entire time he laid, he kept feeling as though a presence was with him in the room. Obviously, the team member did not have a very restful night and decided to just pack up and head home. Another investigator was staying the night in the Overseer’s Cottage and decided to run a voice recorder the entire time he slept. When he reviewed the audio, he captured a strange anomalous sound in the background that could not be identified. Whatever the sound was, the team member knew that he was alone while he slept.
If you are ever in the Baton Rouge area, it is well worth taking the time to head down River Road and check out Nottoway Plantation, as the home and grounds are an incredible sight. When I first saw it, I couldn’t believe how much it actually resembled the White House from one side. Viewing it from the other side, the unique round ballroom sets the plantation apart from any other that I have visited. With its near-endless amount of rooms, intricate craftsmanship, meticulous landscaping and friendly spirits, Nottoway Plantation definitely proves that size does matter, at least when it comes to haunted plantations!