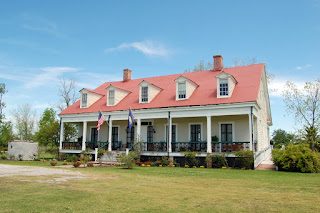 
As one travels about thirty miles south of the extremely up-tempo beat of which is New Orleans, you run into the complete polar opposite. You will encounter a near barren land of swamps, marshland, creeks, bayous, sloughs, lakes, rivers and every other body of water you can fathom, mixed in with a few residential areas. All signs of an eroding coastal area, slowly shrinking year after year. With hundreds of hurricanes pummeling this area over centuries, this area is slowly transforming to a hydrated wasteland. An area that was once swarmed with over sixty grand plantation homes and acres upon acres of farmland looks quite different today with only a couple of antique homes as a reminder of a land that time forgot.
One of the few plantation homes that still stand in this area is Woodland Plantation in a small community of Port Sulphur known as West Point a La Hache which translates into “point of the axe.” The plantation was originally built in mid-1830 by William Johnson, a river pilot/captain/pirate (depending on how polite you are) from Nova Scotia. Prior to the turn of the nineteenth century, with the aid of his partner, George Braddish, Johnson would build the now defunct Magnolia Plantation, which once sat approximately four miles from Woodland. Along with both men’s wives and children, the whole bunch would live under one roof as an antique Brady Bunch of sorts. The Woodland property would consist of the main house, an overseer’s house, tenant’s house and two-story brick slave quarters, which are a very rare site for the time, as the only property to have such slave quarters are at the previously mentioned Ormond Plantation. According to the Woodland Plantation website:

“Captain Johnson and his four sons built the thriving sugar cane plantation with one of the most modern mills of its time. William was also in partnership with the famous pirate, Jean Lafitte. Lafitte would pirate ships off shore then bring the slaves up Grand Bayou, which was a short cut to the Gulf of Mexico from Woodland, and hold them at four large two-story brick slave quarters. These buildings were built at the same time as Magnolia but on the site where Woodland would eventually be built. From there, Captains Johnson and Bradish would pick up the slaves and trade them up and down the river.”

The home would stay within the Johnson family until the turn of the twentieth century when it was sold to the Wilkinson family. They would own the plantation until it was sold to the Creppels in 1997. From there, it was completely renovated to its former beauty and has been transformed into a nine-room country inn. With its bright red roof, the plantation sticks out like a speck of bird crap on a tractor tire. Ok, that may be a bad analogy, as the home is way too beautiful to compare to bird crap but you get the picture! For all you alcohol aficionados such as me, being “one step from twelve steps” as I often like to say, you may most recognize the home on older bottles of the famous drink Southern Comfort. Before the drink was rebranded in 2010, a sketch of the plantation was depicted on the bottle’s label. I bet some of you guys are saying, “Oh, now I know the house you’re talking about!”
As one may find remnants of several buildings that have fallen victim to years of major hurricanes, the spirits and energy of those that once called Woodland home are said to still linger. The primary ghost that is said to haunt Woodland is the younger son of Captain William Johnson, Braddish Johnson. He is often seen wearing striped pants, a silk hat and walking with a gold-tipped cane. With that kind of colorful ensemble, sounds to me that the home is haunted by a pimp, not the son of a pirate! Sounds of disembodied footsteps and voices have been heard echoing throughout the whole house. The apparition of a young boy has also been seen wandering the grounds. Guests who have visited the home reported unexplainable cold spots culminating on the first floor. Many feel that the land is also haunted from the spirits of numerous deceased slaves that were literally held captive, as the conditions were considered less than optimum, even by standards at which slaves normally lived.
As mentioned earlier, you can now stay at the plantation turned inn, enjoying the seclusion of vast farmland and the serenity of the nearby mighty Mississippi. As you come full circle, enjoy a taste of southern comfort while literally sipping a taste of Southern Comfort, which goes quite nicely with a splash of Dr. Pepper, or so I’ve been told. As you look down on the bottle of this mildly sweet whiskey-like drink, be reminded that this may not be the only spirits that are around you, for if you look to the open fields and see the semi-transparent image of a boldly-dress gentleman with a gold-tipped cane, don’t be alarmed, as it doesn’t necessarily mean you have had too much to drink!