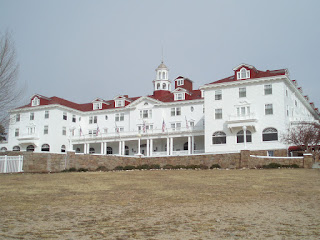 -Lord Dunraven is said to resides in room 401.
-Spirits of young children play along the 4th floor hallways.
-Mr. Stanley appears in the bar and in the main lobby.
-Mrs. Stanley has been seen playing the piano in the Music Room.
-Maid Elizabeth Wilson has been seen cleaning Room 217.
-Homeless woman haunts the Concert Hall keeping guard.

In March of 2009, I was fortunate enough to spend the night at The Stanley. Although it was considered the off season, I wasn't lucky enough to have the hotel completely to myself. Still, it was empty enough where I was able to request a room on the fourth floor, which is said to be the most active. For the life of me, I cannot remember the exact room I was in but apparently it was considered to be one of the most active rooms because throughout the evening, I heard several haunted tours walk and stop in front of my room as they talked about the haunted tales. A very nice, yet unsettling, touch is that on one of the in-house television channels, The Shining is played in a continuous loop. Who needs twenty-four hours of A Christmas Story when you have The Shining 24/7/365! Unless spiders are involved, I am not one to be easily spooked but I must admit, there was something eerie about being alone for the night in a haunted hotel room with The Shining constantly playing. To make matters worse, the bathroom strongly resembled the one in Room 237 from the film. All I could picture throughout the night was that creepy naked old woman sitting in the tub! If you do not know what I am referring to, for the last time, please watch the film!