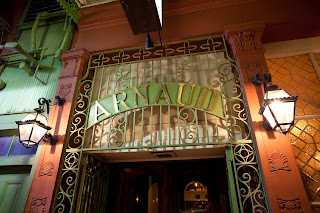 If the French Quarters is the heart of New Orleans, than this next restaurant could possibly be the pulse of the city. Known for its exquisite Creole cuisine, Arnaud’s Restaurant is not only the largest restaurant in the Quarter, it also houses the largest kitchen in the area. I wouldn't want to be a dish washer here! In addition to the large general seating area, Arnaud’s houses fourteen private dining rooms, a large bar and a Mardi Gras museum.
The restaurant was established in 1918 by a French wine salesman by the name of Arnaud Cazenave. It has been said that Mr. Cazenave was quite a character, providing elaborate, top-quality service while making sure that his restaurant was in the most immaculate of conditions. His work ethic earned him the nickname “Count Arnaud”, although he did not descend from any royalty. The Count operated Arnaud’s until his death, when the restaurant was handed down to his daughter, Germaine Cazenave Wells. Ms. Germaine carried out her father’s legacy by running an equally-deluxe fine dining establishment. In 1978, the restaurant was then sold to Archie and Jane Casbarian and is owned by the family to this day.

Count Arnaud was so dedicated to his beloved restaurant; he supposedly still keeps a very close eye on it, even after his death. Several staff has reported seeing the apparition of an elderly man, wearing a tuxedo evident of the early 1900’s. Their descriptions of the ghostly gentleman seem to
match the appearance of the Count himself. He is often seen with a smile on his face, as if he is overseeing the restaurant and is happy to see it is being operated in the manner that he once did. When not supervising the living, Mr. Arnaud has also been seen in the bar area, formerly known as the Richelieu Bar. The bar is one of the oldest structures still standing in the area, dating back to the mid-1700’s. Staff has reported feeling unexplainable cold spots that seem to appear and disappear for no apparent reason in various locations of the bar. Personally, I have always believed that a haunting of this nature is much more palatable than a spirit roaming around a cemetery. I mean, come on, why would someone want to just stay in a drab old cemetery to oversee their "shell" when they could easily visit their place of business on a daily basis; one of which that they shed their blood, sweat and tears for so long. There is so much more emotion in something of that nature.
Another eternal patron of the restaurant is said to be the spirit of Mr. Arnaud’s daughter, Germaine Cazenave Wells. Her ghostly apparition has been also seen wandering around the dining area but seems to concentrate in the Mardi Gras museum, located on the second floor. The museum
was opened in 1983, in Ms. Germaine’s memory and is an excellent showcase of Mardi Gras costumes and memorabilia from years gone by. Many of the costumes found here were previously owned by Ms. Germaine and her daughter, which is the reason many feel her spirit focuses on this area. Staff and guests alike have reported seeing a misty figure weaving through the costume and memorabilia displays. It’s as though Ms. Germaine still admires the beauty of the festive event that she participated in for so many years.
I’ve been fortunate enough to dine at Arnaud’s before and I highly recommend you do the same. The food is incredible and if you are lucky, you may catch a performance from one of the local performing jazz bands that regularly visit the restaurant. As you tap your foot to the snare drum and enjoy an after dinner drink (my preference of cognac), you may even be treated to a ghostly greeting from the father and daughter duo. If so, fear not, as it’s only Mr. Arnaud and his daughter making sure you have a good time. Here in Louisiana, even our ghosts offer their fair share of southern hospitality!