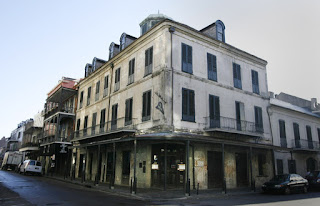 
Hearing the name of our next location, one doesn't need to be a Harvard graduate to realize who this home is named after. However, do not be fooled, as the illustrious Napoleon Bonaparte did not live here, although if things would have gone as planned, this could have long been the residence of the pint-sized ruler.
The Napoleon House is situated in the heart of the French Quarter and dates back for centuries. The original home was initially built in 1794 but was refurbished and expanded in 1814. The remodeling and enlargements were to house Nicholas Girod, the sixth mayor of New Orleans from 1812 to 1815.
During this time frame, a very significant event was taking place in Belgium. On Sunday, June 18, 1815, a French army under the command of Napoleon Bonaparte was defeated by the armies of the Seventh Coalition, comprising of an Anglo-allied army led by the Duke of Wellington, combined with a Prussian army under the command of Gebhard von Blücher. Following his defeat, European powers were not going to take any chances on Napoleon's possible return, so they exiled him to the island of St. Helena; a barren, wind-swept island located in the South Atlantic Ocean. With Mayor Girod catching wind of the defeat and exile of Napoleon, he comprised a plan to rescue the fallen leader from his desolate prison.


Sometime around 1821, Girod formed a group of enthused and well-bodied Frenchman who, with makeshift yachts, would sail to the island of St. Helena and bring Napoleon to New Orleans. Once brought to safety, he would live the rest of his years in the grand three-story mansion built by Girod. Unfortunately Girod and his men's efforts were established a day late and a dollar short, as Napoleon would succumb to stomach cancer and die before any rescue attempts were made. With the tragic news, Mayor Girod had no other choice but to continue living in the grand mansion along with his descendants for years to come.
In 1914, the home would be purchased by the Impastato family and would be turned into the ever-so-popular Napoleon House bar that is still in operation to this day. The second floor of the home once housed the Impastato family, while the third floor was broken up into several apartments that were rented out to the public. Today the Napoleon House is a successful bar and a great restaurant, hosting the traditional city's fare such as jambalaya, gumbo and red beans and rice. The bar is most known for its signature drink, the Pimm's Cup, consisting of gin, lemonade, soda and a garnish of cucumber.
Despite many rumors, the ghost of Napoleon Bonaparte does not haunt the bar (why should it?), but it is home to several spirits of unknown origin. No one can quite pinpoint who or what may haunt the Napoleon House, but many people have had quite a number of strange experiences over the years. The most frequent of unexplainable events are poltergeist-like activity such as the lights turning on and off on command. Guests have asked for the lights to turn on and off a specific number of times and their requests have often been granted. Whatever the source of these hauntings are, they pose no threat, as guests and staff have never felt afraid. Quite possibly, the home may be haunted by Mr. Girod, as he still may be waiting for his de-throned king to arrive.