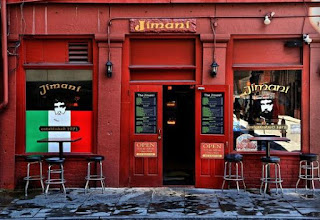 *Some of the following images are graphic in nature.
As I have said several times, New Orleans has always had a dark cloud that seems to hover over it. Even prior to its founding in 1718, the settlement basically served as a safe haven for the expelled, criminal-minded and those just looking to do wrong. By the time you are done reading through all of the city’s haunted locations, you will see that during the eighteenth, nineteenth and early twentieth centuries, New Orleans was in no short supply of deaths, crimes and catastrophic events such as fires and hurricanes. With all of these occurring, one lays out the perfect ground work for one hell of a haunted city. As modern times approached, things shifted somewhat, but not necessarily for better or worse. Gone were the ax-wielding maniacs and torturous madams of the 1800’s, as modernization now brought in gun toting gangsters that would steal everything but the crack off your butt. Heartache and despair is still quite abundant in certain areas of the city, as they still get their raw end of the deal especially in the hurricane department. We are all aware of the disastrous Hurricane Katrina in 2005 that nearly eradicated the entire city. Still, with the fighting spirit that New Orleans has possessed for centuries, they picked up the pieces and rebuilt; whether it was from the ashes in 1788 or the floods in 2005.