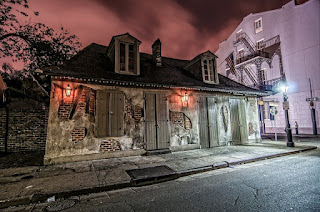 Only a few steps away from the Lafitte Guest House is one of my favorite bars in the city. Lafitte’s Blacksmith Shop is said to be the oldest building in America that has been transformed into a bar. Although the last few years seem to have brought in large amounts of tourists, this dark little bar still is a great place to relax and have a few drinks, while listening to the piano player in the rear. On many occasions, I’ve sat in the back of this centuries old building listening to; you guessed it, House of the Rising Sun. I really wished the saying “If these walls could talk” were true. If such was the case, one can only imagine what this bar would say. Other than the electricity that runs the register and bar area, there are no lights throughout the bar except for candles on the tables. Here, you can find your traditional Louisiana beers, mixed drinks and a concoction called the “Voodoo Daiquiri”. Not sure what is in it but after a couple, you may need a Voodoo priest to revive you from your comatose state!
The building is rumored to have been built sometime around the 1720’s by Nicolas Touze and is one of the oldest buildings in the city to have survived the two huge fires that ravaged the French Quarter. As expected, the bar gets its name from our beloved brother and pirate duo, Jean and Pierre Lafitte. During the late 1790’s and early 1800’s, the home was a regular hangout spot for the two who operated a blacksmith shop here. The legitimate business was a cover which served as a front for their less than legal privateer enterprises, which normally consisted of selling smuggled goods. It is rumored that much of the Lafitte’s profits were often hidden inside the walls of the building. Unfortunately, the treasures have long been gone, but the memories and spirits during this era are still alive and well.

When looking at the famed pirate Jean Lafitte, the best way to describe him would have been the New Orleans version of Robin Hood. He didn’t necessarily steal from the rich to give to the poor, yet he was able to provide much of the city with valuable goods through smuggling that were not﻿﻿ normally obtainable due to the Embargo Act of 1807, which barred American ships from docking at any foreign port. This was problematic for New Orleans merchants, who had relied heavily on trade with Caribbean colonies of other nations. Lafitte and his men soon began working out of the small and sparsely populated island of Barataria, in Barataria Bay. The bay was located beyond a narrow passage between the barrier islands of Grande Terre and Grande Isle. Barataria was far from the United States naval base, and ships could easily smuggle in goods without being noticed by customs officials. Workers would reload goods into smaller batches onto small boats known as pirogues for transport through the bayous to New Orleans.
Following Jean Lafitte’s use of the blacksmith shop, he would go on to play a much larger role in the Battle of 1815, assisting Andrew Jackson in fighting the British Army in exchange for a full pardon. Following this, Lafitte would move on to Galveston in an attempt to assist revolutionaries in freeing themselves from Spanish control. Along the way, many have said that Lafitte and his men buried portions of their treasure throughout the southern parts of Louisiana. As mentioned earlier, this is verifiable with the large amounts of gold discovered at the Joseph Jefferson Mansion in New Iberia in the 1920’s.
Lafitte’s later years were spent in true pirate fashion, as he patrolled the Gulf of Mexico waters, battling and seizing Spanish ships. On February 4, 1823, Lafitte and his men attempted to take over what appeared to be two Spanish merchant vessels. The two ships, which were actually heavily armed warships, seemed to retreat in the foggy waters, until they turned around and began firing upon Lafitte and his crew. Wounded in the fight, Lafitte is said to have died the next day from his injuries.
The spirit of old Lafitte is still said to wander throughout various parts of the French Quarter such as Pirate’s Alley near Jackson Square and Lafitte’s Blacksmith Shop. A possible urban legend also tells of a man who was burned to death in the fireplace of the bar. It is said that when a fire is burning, you can see his eyes gazing through the flames. This may be more fiction than fact, as anyone who has visited Lafitte’s can attest that the fireplace is very small and it would have taken a man the size of an “Oompa Loompa” to fit in there. Regardless, years of haunted encounters from staff and late night patrons do exist. The bar is often a stopping point for many haunted history tours so if you happen to take one of these excursions and take a breather here, get yourself a Voodoo daiquiri and even the corniest tour guide will soon become an Oscar-winning performer!