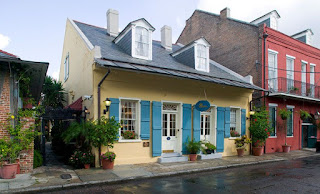 It goes without arguing that New Orleans is the birthplace of jazz music. To be even more specific and pinpoint the actual geographical center of this incredible music, one must look no further than the iconic Louis Armstrong Memorial Park, located in the Tremé part of the city. Situated in the center of the park is the historic Congo Square. It is here where slaves congregated on Sunday’s, their one day off, dating back from the early 1700’s. The weekly events were filled with native music, dance, food and crafts. The tradition would continue for years to come, inspiring hundreds to become jazz musicians who would incorporate the culture and history they experienced from Congo Square into their songs. Walking through this park, one can undoubtedly feel the immense amount of energy left behind from years gone by.

Only a few steps away from the park sits the Hotel St. Pierre. The hotel consists of several small cottages that were moved from various parts of the city. The initial home was moved here around 1781 by French native Gabriel Peyroux de la Roche. The cottage originally stood on his family’s plantation situated on Bayou Road. Gabriel then collaborated with builder Mauricio Milon to have the home moved to the current plot of land, originally owned by the father of Gabriel’s wife, Maria Susana Caue. With time, other cottages were brought in and remodeled into the current day hotel.
Over time, the hotel has been visited by many famed individuals such as Louis Armstrong and Tennessee Williams, who actually owned a home across the street from the building.
Much of the activity that resides at this small hotel is centralized in and around the cottage that once served as slave quarters. Guests and staff have reported hearing the sound of a woman crying. Further inspection could not locate anyone. Additionally, the apparition of a Confederate soldier has been witnessed here. He does not interact with guests and is simply seen wandering the grounds, eventually vanishing into thin air. Strange poltergeist-like activity has also been experienced here such as electronics and lights turning on and off by themselves and objects being moved when no one is around.
Hauntings like these are always the hardest to pinpoint their origins, as the property consists of homes that were moved from so many different areas. Each cottage has their own unique history and who knows what kind of “haunted gumbo” is created when you blend so many structures together in an area already exploding with an energetic history. Years of different culture and events literally overlap one another in this part of the city making it extremely unique, valuable and, oh yea…haunted!