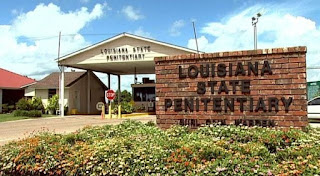 With over eighteen years in state and federal law enforcement, I have always had a particular interest in haunted prisons. Spending so many years locked inside these structures with the very criminals they house, you truly get a sense of respect for this morbid community within a community. No matter how many television shows or documentaries one may watch on the subject, there is no substitution for the real thing. Let's face it, prisons are not a fun place to be! Especially when you are housed in what was once known as the bloodiest prison in America, Angola State Penitentiary.
The long and dark history of Angola begins in the 1830's when the land was purchased by Isaac Franklin. The property was known as Angola Plantation, gaining its name from the region of Africa where a majority of the home's slaves originated. On the grounds, there was a building known as the old slave quarters. It is in this building where inmates from the original state penitentiary, located at the intersection of 6th Street and Laurel Street in Baton Rouge, were used to perform daily duties. The conditions were said to be horrendous and extremely cruel. With the property being surrounded on three sides by the mighty Mississippi River, this fortress has often been described as the bayou Alcatraz.

Although the property had long housed inmates, it wasn't until 1901 when the Louisiana Department of Corrections officially recognized this area as a state prison facility. From then on, Angola State Penitentiary was literally hell on earth, housing some of the most violent criminals that humanity had to offer and, in turn, generated some of the most gruesome acts of violence ever known! Assaults and murders took place on a regular basis. Mass uprising by inmates to protest the harsh conditions were a regular practice. It's bloodiest years were yet to come, as the sixties and seventies would go down in history, as inmates would literally break down in tears when the sentences were handed down and they realized they were going to Angola. During this time, those that were considered as model inmates, or trustees, were actually given jobs as makeshift guards. Known as turn-keys, these inmates possessed weapons and carried out the same duties as an actual correctional officer. It has often been said that the turn-keys were actually tougher on their own kind than the sworn officers were.
I have spoken with several elders who were actually guards at Angola during the seventies and the stories are amazing. How these guys made it the end of their shifts every single day, while having the courage to return the next is beyond me. In one incident, the guard was supervising a large number of inmates assigned to a work detail swinging ditch blades, clearing out overgrown grass, when two inmates began arguing. In a very nonchalant fashion, one inmate walked over to the other, slashed him with the two foot long blade, eviscerating him from one side of his stomach to the other. The assailant then quietly walked over to the guard, laid down his tool and said, “ok, Sarge take me back in!”
In another instance, it was count time and the guards could not account for one of the inmates. After a near hour search, fearing they had an escaped inmate on their hands, the guards entered the kitchen area where the meat locker was located. As the guards opened the freezer they found the upper portion of the missing inmate with his lower extremity being found soon after in a trash can. These were the kind of events that took place on a daily basis, giving Angola the reputation that it had. As I type this, I can only think that it was a good thing they found both halves before chow time!
-"Convict: It's What's for Dinner!"

Despite the events mentioned, I can only assume that I merely scratched the surface of the overall amount of violence that has taken place inside the fences of Angola. From a paranormal investigators standpoint, if this place is not haunted, then there is no such thing as a haunted location!
For obvious reasons, an actual paranormal investigation has not been conducted of the housing areas. However, from interviews of prior staff, there are several areas that seem to be the focused “hot spots” regarding paranormal activity. In particular, the building that once served as a woman's dormitory up until the sixties, now houses newly hired officers that are participating in their initial job training. Staff have reported immense feelings of depression and sadness in this dormitory.
Another location said to be active is the Red Hat cell block, home to the infamous "Gruesome Gurtie", the morbid nickname given to the electric chair that gave the final punishment to many convicts that called Angola home. It is said that after its final execution on July 22, 1991, Gruesome Gurtie claimed the lives of eighty-seven inmates, before
it was put on display in the Louisiana Prison Museum, which is also said to be haunted, for obvious reasons! It would truly be a paranormal investigators dream to be allowed unlimited access to investigate the entire property for a solid week. One can only imagine what could be discovered in such a notorious location!