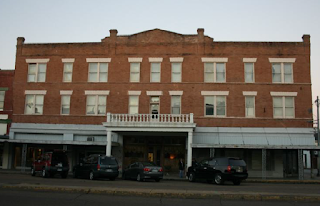 The Egan Hotel in Crowley had been a long sought after location to investigate along with the adjacent Crowley Opera House. Both locations were owned by the same individual and he had never allowed a group inside either building to investigate. This made me want in even more so we pulled together all our resources and met with the owner several times. After much sweet talking and convincing that our group was legitimate enough, he finally gave us the green light. We have been eternally grateful since then.
After many attempts by the group and the building owner, very little information was found on the history of the Egan Hotel. All we know is that the hotel was built in the early 1900's and closed down in the 1960's. During its tenure as a hotel, celebrities such as Babe Ruth, the New York Yankees, and Clark Gable have stayed here.

Of the many places we have investigated, the Egan Hotel is one of the top as far as grizzly happenings taking place. In its early existence, the hotel was a major mob hangout. That in itself, can be assumed for grounds for criminal activity. Reports tell of a young boy and his father being murdered here as well as a woman being murdered by her husband. On several occasions, priests have been brought in to perform cleansings of the building. The results of these attempts are small religious medallions being placed over the doors of the rooms where deaths have reportedly taken place, only adding to the creep factor.
As mentioned, we were fortunate enough to finally be given approval to investigate under one circumstance; we conduct our investigation then the owner would have it blessed one last time, never to let anyone investigate it again. Obviously, we complied. During our investigation, we had several interesting things that happened. In room 302, we received numerous EMF spikes via the EMF meter. There was no power throughout the building so we could not affiliate the spikes to any poorly-insulate wiring or breaker panels. We then began to talk out loud with whatever may have been present. After asking for a sign, we received what sounded like several knocks in room 232.
Later in the investigation, two of our members reported seeing what looked like the shadow of a man walking into the bathroom on the second floor. Further investigation found no one present. About an hour and a half later, a sudden temperature drop was recorded from fifty seven to a drastic 39 degree drop. This fluctuated back and forth several times.
Going over the infrared cameras initially got us extremely excited, as we captured what appears to be some sort of light anomaly flying across the screen. Further and closer examination proved that the object was simply a large bug. To see for yourself how easy one could mistake a bug for something more, you can view the clip HERE. It is often quite frustrating as to how many false positives one can get in what we initially perceive as evidence. Many groups may often not analyze their evidence thoroughly enough for validity, but that is something our group takes great pride in. Although it can be a bit of a letdown to know our evidence was logically explained as something other than supernatural, it is a rewarding reminder of what sets us apart from many other groups.
Our one and only visit to the Egan Hotel proved to be quite interesting. We would love to have been able to conduct a follow-up investigation but we had to abide to the owner's request. Last we heard, the building was cleansed one last time and no one has been allowed back in. Did the cleansing work, abolishing any signs of paranormal activity? No one really knows nor may anyone ever find out!