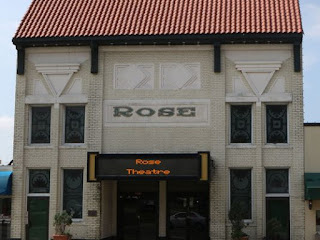 The Rose Theatre was built in 1927 by C.J. Goodwin and was initially intended to accommodate the traveling vaudeville shows of the time as well as an opportune venue to feature current silent films. The building then turned into your run of the mill movie cinema until it shut down in the 1970's. Fortunately, in 1985, the original owner's donated the theater to the local Cotton Country Players, who began running local community performances.
The theatre also has a history of unusual activity that continues to intrigue former and current owners, employees and guests alike. Objects known to have been left in specific locations get moved to new locations. Disembodied voices and other strange noises have often been heard when no one else is around. Doors are often opened and closed, with no one around to do so. Guests have reported a sense of uneasinesses, as if someone was watching them. On several occasions, staff have reported seeing an apparitional figure on the stairwell, near the balcony area as well as hearing the piano play by itself. Many of the guests and staff feel these strange occurrences are attributed to Mr. Goodwin's wife, Mrs. Rose Ames Goodwin, a benevolent spirit that playfully interacts with those who entertain the idea of the afterlife.


﻿            We have been fortunate enough to conduct two separate investigations of the Rose Theatre. On our initial investigation, we did encounter some very odd and unexplainable battery drainage on several of our electronic devices that were fully charged prior to our visit. Sudden battery drain has often been associated with the presence of a paranormal entity, however, by our standards of investigating, we cannot take this single occurrence and associate it with definitive proof of anything more than common coincidence.

Crash course in paranormal 101: Investigators believe that spirits are made of energy. In order for a spirit or entity to manifest, it must culminate energy from whatever sources it can find. In many cases, that energy is obtained from batteries, causing sudden energy drainage in whatever device(s) the batteries are powering.

Our second investigation proved to be a bit more fruitful. We set up a laser grid, facing the stage area. The purpose of the laser grid is to detect the slightest bit of movement in the shape of a dense shadow or solid figure. The pattern of laser lights contours to every curve and edge and easily accentuates if those curves are disturbed. If anything passes in front of the repetitive and constantly symmetrical laser dots, an outline of the protruding object is easily visible. In this case, investigators observed what appeared to be a shadowed mass break the laser grid. This happened twice during the investigation.
While investigating the backstage area, one investigator began to feel extremely uneasy. Without mentioning this, another investigator simultaneously heard disembodied laughter from over head. Obviously, no one else was present. As another investigator inspected the dressing room area, he noticed a door he had recently opened was completely shut. No other investigators had been near the door. He purposely opened the door completely, left the area for a few moments and when he returned, the door was once again completely shut. All other group members were accounted for during this time and no other individuals were present in this portion of the theater.
This is a prime example of why we try and conduct as many follow-ups of a location as possible. No location, no matter how reportedly haunted it may be, will perform every single night of the week. It may take twenty visits to a location before you obtain some sort of unexplainable evidence. This does not make it any less active than another spot. As with any other form of hunting (duck/deer/fishing), ghost hunting relies on lots of luck and being at the right place at the right time.