Ft. Jackson - Buras, LA (The Failed Fort of the Confederacy) 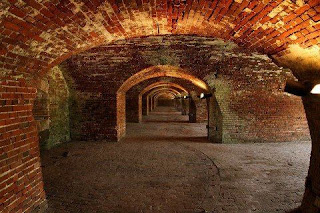 
By the early 1800’s, New Orleans and the surrounding areas were no stranger to war and attacks, specifically from Spain and Britain. After several skirmishes and attempts to seize New Orleans, the city’s hero, General Andrew Jackson ordered that a fortification be built to not only protect the city but to secure the river from any future attacks. Construction of Fort Jackson began in 1822 and was completed and occupied in 1832. It was then garrisoned by a small force until February 9, 1842, when it was declared a military reservation by executive order of President John Tyler.
﻿

With the American Civil War now under way, the Union had their eyes set on capturing New Orleans and it would not be long before a deadly attempt would be made. The infamous battle to gain control of New Orleans took place at Fort Jackson and St. Phillip from April 16, 1862 until April 28, 1862. During these tense 13 days, Union soldiers, led by Flag Officer David G. Farragut, commanded naval ships into the murky waters and unleashed a barrage of mortars onto the Confederate forts. For several days, the bombardments continued, with the river obstructions being partially destroyed on the night of April 22nd. The Union and their firepower was too much for the Confederacy to contend with, as ships pushed through the barricades and made their way to New Orleans, ultimately seizing the city. After putting up a great fight, the forts officially surrendered on April 28th. The final death toll from the battle was approximately 1,011!

Following the engagement, the fort was used as a Union prison and for other military exercises. During World War I, the fort was used to train young soldiers. The fort was finally shut down and officially acknowledged as a National Historic Landmark in 1960. Despite receiving a great deal of damage during Hurricane Katrina and Hurricane Rita in 2005, the fort still operates as a public park for visitors.
It can only be expected that with such a large battle that cost over a thousand lives, there comes many haunted tales along with it. The sounds of mortar fire and gun shots have been heard here along with the fresh smell of burning gun powder. Visitors have also claimed to see the apparitions of Confederate soldiers wandering the grounds, some of which seem to be marching in formation, carrying on as they once did in their past lives. Not as common of an occurrence, but people have also witnessed the apparition of a young woman walking and singing around the property. As she is approached, she simply vanishes into thin air! No one is for certain as to who this woman is, what she wants, or why is she even there. Whatever the case may be, Ft. Jackson definitely appears to be a hot bed for haunted and military history alike.