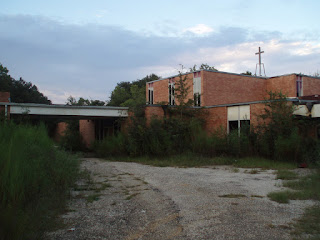 Another one of those urban legend locations, the old St. Scholastica Academy Priory, also known to locals as the SSA Nunnery has long been a hot topic amongst haunted enthusiast wanting an adventurist investigation as well as drunk teens looking for a place to break the law. Legends tell of a large group of nuns dying here in a fire years ago and trespassing teens that went missing, never to be found again, however none of these claims can be substantiated. Adjacent to the building is a cemetery, said to be the resting place of several nuns. Although there were a few graves from the early 1900’s, most were from the sixties through the early eighties. Some claim that the building was built in the early 1900’s but this is impossible, as the building and its fixtures suggests a construction date of approximately the fifties or sixties at the earliest. There could have very well been an older building that existed prior to the current one but we were unable to find the history of it.
The land and building is in complete shambles and I can only presume that it is frequently patrolled by local law enforcement, as to avoid trespassing so I do not recommend even attempting to visit this place. However, as you will continue to learn as you read on; do as I say, not as I do!

Along with a few investigators, I paid the old nunnery a visit in early 2006, shortly after Hurricane Katrina completely ripped this area apart. Many homes were still empty and those that were present were in the process of rebuilding. There was an old home right next to the priory that was being remodeled. We spoke with the homeowners, and they had no problem with us investigating the building next door to them. They were very hospitable and even grilled steaks for us that evening and made some sort of alcoholic concoction. It had strange things floating in it but it was still good! Any fellow well-mannered southerner will agree that when offered food or drink, you really don't question the ingredients. You just smile and consume! Fortunately it was neither a narcotic nor anesthetic because none of us passed out and woke up with our kidneys missing!
Due to the enormous size of the building, we quickly realized that running a full DVR system would be useless, so we decided to go "old school", using only handhelds, digital cameras, voice recorders, and EMF meters. The building greets you with an ominous entrance, holding a massive
altar. The building then branched off into long and narrow wings, containing dormitory-style rooms. The place literally looked like something out of a movie, definitely having a "spook factor" to it. Many urban legend websites lists that at the priory there is a door said to be the "doorway to hell", as once you enter the room, you never get out! Although this made for great reading and story telling, I can tell you there is of course no truth to this. The door in question was just like the dozens of others except some teen had spray-painted the words "Doorway to Hell". I often find it amusing how something so little can often be blown way out of proportion but that is often the basis for most of all urban legends.
We broke into two small groups to conduct the investigation. About fifteen minutes into it, one of the investigators stepped on a piece of broken beer bottle, going through his shoe and sticking him in his foot. He sat down near the altar to assess the damage. In doing so, he placed his EMF meter on the ground. Humorously, I began filming his foot, not realizing that the EMF meter next to him began going off. Could this of been a concerned spirit, checking on the investigator’s injuries?
Around the same time frame, the other investigators were inspecting the other side of the
building, conducting EMF sweeps and EVP work. Other than the strange EMF spikes correlating with the injury and constant instances of feeling like you were being watched, no other firsthand encounters were experienced that night.
Evidence review proved to be interesting as we captured an interesting electronic voice phenomenon. As two investigators are talking about their handheld camcorders, we heard a third voice clearly say, “lights, camera, action!” It is well known that some spirits have a sense of humor. Could this have been an example of one! I’ve often told people that ghosts are just like people; you have nice people and you have pieces of crap! Nothing really changes when you die!
As I mentioned, the old nunnery is quite a creepy location. One who visits can understand where the years of haunted tales come from. I'm sure the area has been rebuilt a great deal since I visited soon after Katrina. About a year ago, I found a site that had more modern pics of the priory and it was even in more disrepair than before, as vandals had done even more damage.  After even more years of neglect, damage and police presence, I recommend not trying to visit this area for various reasons; arrest being number one!