Masonic Children's Home - Alexandria, LA (Laughter From the Past) 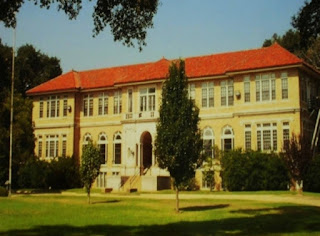 A grand home for its time, the children’s Masonic Lodge served as a quality refuge for orphans for nearly seventy years. The home was initially built in 1925. The local Masons believed that the construction of this new home would advocate much better living conditions and an overall improvement in well-being, as opposed to the state-ran orphanages of the time, which were notorious for not being in the most optimum of conditions.
The grounds initially consisted of a boys’ dorm and a girls’ dorm, with a chapel and large infirmary being built soon after. The lodge opened with its first residents, six young siblings, ranging from three to fifteen. The population soon grew quickly, as it is estimated that a total of seven hundred and seventy-six children once called this place home. The home finally closed in May of 1994, with the remaining ten children being moved elsewhere. The buildings have remained abandoned ever since.


Roughly seven or eight years ago, plans to convert the grounds into luxury apartments were put into motion. For various reasons, contractors and repairmen began working in these buildings. It is here when reports of ghostly experiences began. We had interviewed several of these workers and most of them all had at least one interesting story to tell. Most common reports were seeing young children peering out the dorm windows at them, when the workers knew no one was inside. Additionally, these young guests enjoyed playing pranks on the workers as their tools would quickly disappear and show up in other locations.
Unfortunately, we were never able to obtain an investigation of the dorms, as we were extremely interested as to see what we may find there. Several years later, construction went into full force, as the two dorms were demolished to make way for the new apartments. However, the large three-story Italian Renaissance style infirmary still stands and will be used as the complex’s office. I cannot help but wonder if these new tenants will have any ghostly experiences in the apartments that now stand on these grounds. I have often entertained the idea of dropping business cards into the mail boxes of all the tenants with a cheesy heading of something along the lines of "Have a Haunting? I'll tell you who you gonna call!"