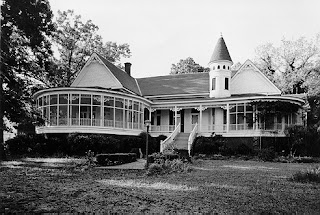 *Special thanks to Bess Maxwell, John Combs, Traci Myers and the rest of the North Chapter for all their hard work in these investigations.

Also known as the Baughman House, this beautiful Queen Anne victorian style home was built in 1902 by Jefferson Davis Baughman. The home, with its unique design, sits on over eight acres of illustrious landscaped  and wooded land. Jefferson Baughman and his wife, Nancy, had four daughters. Ms. Faye was the oldest daughter who was the last one to reside in the beautiful home and passed away in the late seventies. After her passing, the home began to deteriorate little by little. After years of the home being unused, the home fell into disrepair. Fortunately, in 2010, the home was bought by Pat and Kay Carroll and they began the daunting task of bringing back the home to its former beauty.
A background of any unusual or possible paranormal activity is generally unknown. We have one report of visitors on the front porch, after the home was abandoned and in a state of neglect, of an old radio, possibly in one of the bedrooms, suddenly coming on at a loud volume, when it was known that there was no electricity to the home at the time.

Our Northern Chapter has been fortunate enough to conduct five investigations of this grand plantation, thanks to the hospitable owners. We started investigating it in 2010 and, like the owners, have watched it transform from a neglected home to the beautifully transformed plantation that it is today.
Over the span of our visits, it's almost as if the spirits present have become more accustomed to us, as activity has seemed to intensify with each visit. On our first visit, we turned a flashlight on and placed in on the mantle. Many investigators will do this, only they will partially unscrew the battery cap of the flashlight, causing the slightest of movements or vibrations to cause the light to flicker on and off. We feel that this method is too controversial, as there is way too much room for contamination, so we simply secure the butt cap on the flashlight, turn it on, and if an anomalous presence is legitimately there, they will ensure the light turns off regardless.
Such was the case, as we secured the butt cap of the flashlight with the hopes of obtaining some sort of interaction. Investigators spoke out loud, asking for a presence to turn the light off. As this
was taking place, investigators also recorded the background audio. During the duration of the investigation, the light never turned off, but after reviewing the audio, as an investigator asked to turn the light off, we captured an EVP saying, “locked.” Following this, another investigator is heard attempting to motivate the spirit and asked it to please try and turn the light off. Once again, an EVP was captured of a female voice saying, “I was.”
Our second visit seemed to have a bit more personal interaction. This is the whole reason we firmly believe in the importance of follow-up investigations. We truly feel that the more we make ourselves known, the more an entity may warm up to us. The concept is pretty simple. During our second investigation, as one group member is setting up camera equipment, he clearly hears the sound of footsteps coming down the hall area. Further inspection found no one was present. Reviewing audio proved to be quite interesting. During the night, after an investigator sneezed, the other member said, “bless you.” Immediately following this, our recorders captured an unknown voice mimicking the investigator by saying, “bless you” twice, one after the other. Shortly after, whatever was with us that night apparently became tiresome of our barrage of questioning and demands, as we recorded an unknown voice simply saying, “go home!” Pretty self explanatory! In an additional audio recording, you can hear a voice clearly say, "lights out!"
Our third investigation was actually part of one of our continuing education courses at the local community college in Bossier City. We were accompanied by several of our students who were looking for a ghostly encounter of their own. Two flashlights were placed on the ledge between two headstones of the former residents, Mr. and Mrs. Baughman. When a request was made for Mrs. Baughman to turn on the flashlight on the right, it came on immediately! Then a request to turn the light off was made, and it did so. A second request to turn on the light resulted in the flashlight on the right coming on a second time, then subsequently dimming. At this point, despite the cooler outside air, a very distinct drop in temperature was noted in the immediate area around the flashlights. When asked if Mrs. Baughman had enough energy to turn the light off, it suddenly became very bright, and stayed on until manually turned off. The metal shaft of the flashlight was several degrees cooler than the light on the left, which was only a few inches away. As the light on the right became brighter, one of the investigators felt a very heavy sense of extreme sadness, to the point she had to leave the area for several minutes to recover. Needless to say, the students that accompanied us that night did not go home unsatisfied!
Our fourth and final investigation gave us similar encounters as the third visit. More shenanigans with the flashlight, as we asked for it to be turned on and off. Several times, we received unexplainable EMF spikes in the same family cemetery. As the night was drawing to an end, one investigator asked for one more sign that someone was present with us. Immediately after, the alarm system of the homeowners' car was activated. No one was present, the keys were not in the possession of the homeowners and they advised us that in the five years of owning the vehicle, this had never happened before.
In closing, Edgewood Plantation has proved to be quite a fruitful place to conduct our investigations and the home is a prime example of how you do not need a grand list of prior paranormal experiences to consider investigating a location. Every spot that is known for being haunted had to begin with one claim. Sometimes that initial claim has yet to be encountered and that is why we constantly patrol the state looking for locations that draw our attention. When you have done this long enough, sometimes a place just calls out to you. Edgewood definitely got our attention!