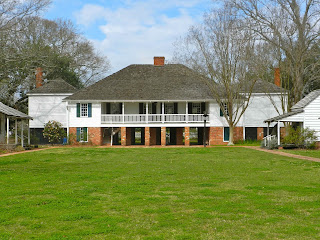 *All pictures below are courtesy of www.kenthouse.org

If you are looking for a true rendition of French and Spanish life during the late 1700's, then look no further than Kent House Plantation! This beautiful home is one of the oldest original structures still standing in Louisiana. This French colonial home was built around 1796 by French settler, Pierre Baillio II, on ground due to a Spanish land grant that consisted of 500 arpents, which is approximately the French equivalent of an acre, near Poste des Rapides.
In 1842, the home was sold to Mr. Robert Hynson of Kent County, Maryland, oddly giving this home its final name. After the home luckily survived almost being burnt down during the 1864 Civil War Red River Campaign, it passed through several different owners, and was finally divided into three sections and moved two block over to its current location in 1964.

Kent House is the quintessential example of Creole lifestyle during a working-plantation era. The grounds consists of the main home, several slave quarters, workshops, and an old barn which is still used to this day to make pure cane sugar. Public events are regularly held here to showcase the methods once used to harvest, boil, and prepare sugar cane into the granulated sugar we know of
today. On a side note, the slave homes are original structures, however they have been moved from various locations throughout the state and are not native to the original property. Regardless, they still breathe the original history of the era, giving you a glimpse into the past.
Although not advertised as prominently as many other Louisiana plantations, Kent House also has its share of hauntings. Respectfully, the plantation prides itself in educational courses to the youth and the general public, they rarely mention the haunted encounters unless during Halloween time, when the home is host to ghostly events for children.
On several occasions, I have spoken with some of the staff at Kent House and it is quite interesting how many paranormal encounters have been experienced here in a location not publicly advertised as being haunted. It may take a little coaxing but once the staff warm up to you, the tales of the paranormal quickly begin to spill out. Based on my interviews, the most active part of the home is one of the bed rooms, where several of the staff have reported dresser drawers and closets opening on their own when no one else is present. Whispers and disembodied voices have been heard and the local groundskeeper reported seeing a woman in a long dress wandering the grounds. The encounters do not necessarily come in a

fearful tone, as the staff seem to embrace the local “residents” as a respectful gesture to the home's history. That is one of the most unique aspects of paranormal activity in Louisiana. Many have learned to make it a part of their daily lifestyle, not fearing it, and simply giving it room to breathe. I guess it can best be related to mowing the lawn near a nest of wasps: you don't mess with me and I won't mess with you!