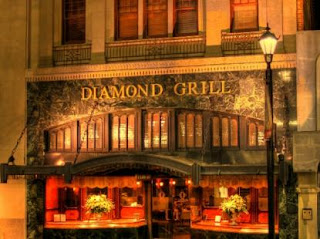 The Diamond grill was originally built in 1865 by Scottish immigrants who decided to open a jewelry store right on the Red River. Their business quickly boomed, due to the high river traffic that came in daily. Several years later, the jewelry store was purchased by a German, Carl A. Schnack and the business quickly became a landmark for the city of Alexandria. To this day, Schnack’s is synonymous for their high quality jewelry.
In the mid 1990’s the store moved locations, leaving the beautiful art deco building empty. It was then purchased by a local attorney and the grandson of the original builder, transforming the location into a fine dining restaurant. To pay homage to its years as a jewelry store, the restaurant was cleverly named The Diamond Grill. Let me personally say that the food here is incredible and the décor is beautiful. It is only the icing on the cake to know that staff and guests have reported this place as being haunted!
The resident spirit that calls this place home has been nicknamed “Stella”. She has been seen on several occasions as a well-dressed, sophisticated young woman. Stella is said to have a penchant for taking jewelry and placing it in other areas of the restaurant. In addition to her apparition being seen, staff has reported seeing a black mass on the third floor and objects such as candlesticks moving on their own. Is Stella a long lost patron still attached to this once-jewelry store? Who knows, but I highly recommend paying this place a visit. If you don’t run into Stella, you can at least guarantee a wonderful dining experience!
Posted by duplechien at 5:20:00 PM