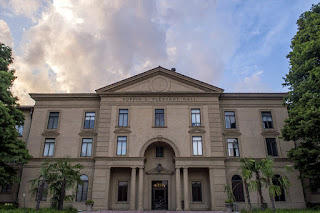 
Louisiana State University in Baton Rouge is known as one of the most prestigious colleges in the country. From its top quality academics to its star-studded athletics, LSU is the place to go for the soon to be college student. Just as LSU is known for its rowdy football games in the massive stadium ironically dubbed “Death Valley”, an actual death in this valley has made a women’s dorm on campus quite an interesting place as well!


Originally called Smith Hall, named after President James Monroe Smith, Pleasant Hall was built in 1931 and served as the campus’s first women’s dormitory. The long standing dormitory/hotel operated until 2002, when it was converted into the continuing education department.

The gruesome tale that has long been synonymous with this building, fueling years of urban legends, dates back to the 1960’s. A female student is said to have gotten into an argument with her boyfriend here. As I often like to say, apparently the “fecal matter must have hit the oscillating device”, as things escalated quickly. The rumor is that the young woman became so enraged that she pulled out a pistol and shot her boyfriend in the face! Must have been one hell of an argument!


Apparently the young woman was in a complete state of derangement when she committed this horrible act of violence. When she realized what she had just done, assuming her boyfriend was dead; she fled the scene to her dormitory room, room 312, and turned her own weapon of destruction on herself, committing suicide. Sardonically enough, the boyfriend survived from his near fatal injuries. Almost sounds like a bayou version of Romeo and Juliet!

It is said that the spirit of this young woman still wanders the building, primarily the area that was once room 312. Janitors, housekeepers and other staff have long reported strange occurrences at Pleasant Hall, primarily throughout the third floor. Most common experiences reported are unexplainable cold spots, feelings of uneasiness and strange sounds when no one else is present.


Although we have hosted our popular continuing education course at LSU, which consist of a hands-on investigation, we have never had the opportunity to take the students on an investigation of Pleasant Hall. I think it is safe to say though, that in the near future, we will be paying this location a visit with our class we have amusingly coined “Geauxst Hunting 101”, as an homage to our beloved purple and gold!
Posted by duplechien at 2:30:00 PM