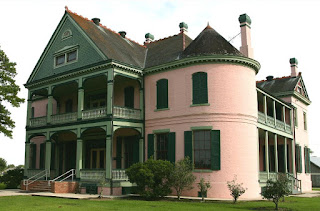 
In a land that has been historically known as a cultivator of cotton, one must not forget the importance that southern Louisiana had on sugar production, primarily in Terrebone Parish. It is here, in the town of Houma, where one of the more essential plantations that can be credited for its large amounts of sugar production lies.
Southdown Plantation has a long history, dating back to the late 1700's when the property, once owned by the Houma Indian tribe, was obtained by means of a Spanish land grant. Two Cuban brothers purchased the land and began by building a small home on the grounds. The property was then sold to another pair of brothers, Jim and Rezin Bowie who decided to use the near thousand acres of farmland to harvest indigo. This did not prove to be very successful, as the Bowie brothers later sold the property to William Minor in 1831. It is Mr. Minor that truly made Southdown what it is today. After seeing that indigo cultivation was not the route to go, with proper machinery, he began growing sugar cane and producing sugar at an alarmingly successful rate.

In 1859, Mr. Minor constructed what will forever be known as the grand Southdown Plantation that sits on the property to this day. The original one-story brick home was expanded in 1893, when a second story and Virginia style colonnaded walkways were added. At its pinnacle, the grounds consisted of over ten thousand acres of sugar cane fields, a sugar mill, a workforce of roughly two hundred thirty-three slaves and even a race track.
From this point on, the plantation was moved from generation to generation until finally falling into the hands of the Terrebonne Historical and Cultural Society in the 1970's. In 1982, the 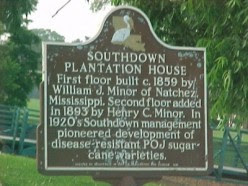 grounds officially open as a tourist attraction, allowing visitors to see the home and its mill as it once was.
I know this may come to surprise, but there are rumors that this home is actually haunted! Again, please ignore my sarcasm! The primary spirit that is said to haunt Southdown Plantation is that of a young girl, said to be the former owner's daughter, Katherine Minor. Her apparition has been seen playing throughout the home and gazing out the windows. The sounds of what can be best described as a child playing has been heard upstairs when no one is up there. The spirit seems to enjoy playing harmless games of hide and seek, as guests and staff has reported personal items disappearing, only to be found in the strangest of locations.
Some people have also rumored that the grounds are haunted by several slaves who are said to have died here. As mentioned, with a manifest of over two hundred and thirty slaves, one can only assume that conditions were not the best. Legends tell of one of the prior owners who received great pleasure in the rape and murder of some of his slaves. Although this cannot be verified, record books show that this was not an unheard of practice for the time.