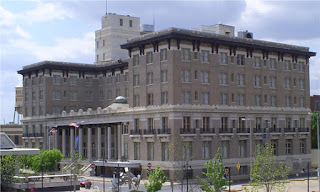 The beautiful Hotel Bentley has served as the quintessential landmark for Alexandria for many years. From its beautiful classic Renaissance design to its illustrious past clientele, the Bentley was the place to stay during its years in operation. In 1892, a lumber tycoon by the name of Joseph A. Bentley moved to the area, looking to construct a grand hotel. Once initial construction was complete, the Bentley opened to the public in 1908, which a later addition being erected in the 1930's. What made the hotel especially unique is that Mr. Bentley transformed the top floor into his own personal apartment, event containing its own private elevator, all of which is still intact to this day.
Throughout the years, the hotel has seen its share of notable individuals. Primarily, during WWII maneuvers, military figures such as Major General George Patton, Lieutenant Colonel Omar Bradley, Colonel Dwight David Eisenhower, and Second Lieutenant Henry Kissinger laid their heads to rest here.

What many people may not know is that not very far from the Hotel Bentley, lies Bolton High School, constructed in 1926. It is in the basement of this school that these same figures drew up the initial plans for what will be known as D-Day; the day United States troops stormed the beaches of Normandy to free Europe from Nazi occupation on June 6, 1944. There have also been several Hollywood celebrities that have stayed at the Bentley such as Roy Rogers and the “Duke” himself, John Wayne. Unfortunately, the Bentley was closed in 2004 yet there have been plans to reopen this grand hotel for quite some time.
As interesting as the building's history is, it also has a bit of a dark past, making it that much more intriguing. Mr. Bentley himself, passed away on the top floor suite, a young girl is said to have fallen to her death down the elevator shaft, and a young man died by falling down a flight of stairs. Many people feel that these are the resident spirits that still haunt the hotel to this very day.
Growing up not very far from Alexandria, I have often heard of haunted experiences from people who had once stayed at the Bentley. In one particular case, a friend of mine stayed here in the 1990's. He said that several times during his stay, he heard what sounded like people running down the halls, laughing, and talking. He would open the door to find no one around! A common occurrence reported by many people who had stayed here were that of a “ghostly elevator”. Sure, it could be due to electrical problems, but many people have reported the elevators would move floor to

floor, opening at random floors, with no one inside. The top floor has always rumored to be the most haunted portion of the hotel. Could Mr. Bentley still be attached to his beloved creation?
I truly hope all the rumors are true and the Hotel Bentley soon reopens as the grand hotel that it once was. For now it sits as a shadow of its former self, only allowing pedestrians to peek through the locked doors to see the beautiful architecture and grand lobby, literally trapped in time. Possibly the hotel may not be as abandoned as we all think, as its ghosty occupants may still wander the halls and carry on as they once did when this location was truly the pinnacle of what the city had to offer!
*UPDATE: As of now, the lounge is currently opened at the Hotel Bentley, named the Mirror Room.