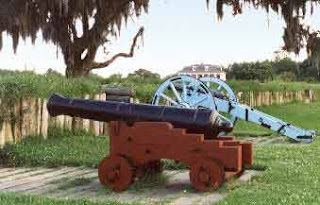 Many military historians will tell you that there is no battle in Louisiana more crucial than the Battle of New Orleans. Taking place on January 8, 1815, this was the final battle of the War of 1812, as United States troops, led by General Andrew Jackson, fought off the British Army, led by General Edward Pakenham. The battle was critical, as it prevented the British from seizing New Orleans as well as the vast amount of land we know as the Louisiana Purchase. One can only imagine how history would have been re-written if we would have lost this intense battle. Let’s face it; we could all be eating tea and crumpets right now, instead of beer and boudin!
What is believed to be the most ironic part of the battle is that it could have actually been prevented, saving hundreds of lives. On December 24, 1814, the Treaty of Ghent had been signed, placing a truce between both sides. In the days before e-mail and text messages, news took a bit longer to reach its desired source, so while news of the peace treaty was on its way, thousands were still battling for their lives.

The battle is truly an underdog story; something Louisiana is quite accustomed to. A British Army of nearly ten thousand made their way﻿
through the Mississippi River to face a United States Army of roughly three thousand. However, when the smoke from the muskets and cannons cleared, only thirteen Americans lay dead, with thirty-nine wounded, while two hundred and ninety-one British soldiers were killed, one thousand two hundred and sixty-seven were injured. Apparently, the British though this would be a cake walk, as they were greatly outnumbered. However, they did not do their homework as their soldiers nor their equipment was quite rigged for the swampy terrain they would soon encounter. The shallow, winding waters prevented larger British ships from entering the area, so grueling paddling had to be undertaken.

The British made their way to the battle site early in the morning of January 8, 1815. Under dense fog, they planned to take the U.S. troops by surprise. The strategy did not go as planned, as the fog suddenly lifted, exposing the would-be intruders. To add insult injury, in a true "boneheaded" move, Lt-Col. Thomas Mullins, the British commander of the 44th Regiment, had forgotten the ladders needed to cross the canal and scale the earthworks and an attempt to dig out a canal proved futile. This resulted in British troops having to drag their boats through the marshy land and when they finally made it to elevated land, they didn’t have the equipment, nor probably the energy, needed to progress.
It is said that the unexpected victory can be attributed to the night before, where nuns and worshipers gathered at the Old Urseline Convent in the French Quarters and prayers before a statue of Our Lady of Prompt Succor, pleading for some sort of divine intervention. The next day, during mass, the Prioress of the Ursuline convent, Mother Ste. Marie Olivier de Vezin, made a vow to have a Mass of Thanksgiving sung annually should the American forces win. At the very moment of communion, a courier ran into the chapel to inform all those present that the British had been defeated. Patrons kept their word and the vow has been carried out annually ever since.
With the withdrawal of the British, New Orleans was truly saved from an uncertain future. The Chalmette Battlefield would be honored as a grand stage for the preservation of Louisiana history. The grounds were turned into a National Park and added to the Register of Historical Places. Adjacent to the battlefield is the Chalmette National Cemetery; seventeen acres of land being home to the graves of over fifteen thousand soldiers who died in battles from the Revolutionary War all the way to the Vietnam War. The cemetery even includes graves from the famous Buffalo Soldiers, black cavalrymen who served in several regiments of the U.S. Army.

Also located on the Chalmette Battlefield grounds, and serving as a museum and visitor center, is the Beauregard House. The Beauregard House was never used as a plantation, and was built in 1830. It is named for René Beauregard, its last owner, the son of the Civil War Confederate General, P.G.T. Beauregard. It is quite ornate and one who did not know better, would think it was an original plantation home.
Under the cover of darkness, the battlefield is said to still showcase ghostly remnants of the bloody battle. Visitors have heard gunshots and cannon fire as well as seeing strange balls of light. Could these lights be the ever-so-popular "Fee Fo Lais"? If you have never heard of such a thing, you are not Cajun, but you probably know of the phenomena under a different name. For a detailed report I once put together on the Fee Fo Lais, click HERE. In addition to these small bouncing "electromagnetic luminaries", several apparitions of British and U.S. soldiers have also been seen wandering these grounds. I have visited here several times during the day and the park is quite impressive. An investigation would be tricky here as the grounds are low lying and the slightest rain turns the battlefield into the same slushy ground that the British were overthrown on. Still, I highly recommend visiting the Chalmette Battlefield, as it is such an important landmark.