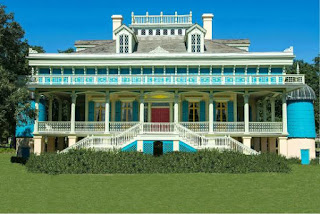 I believe that I can proudly say that I have visited at least ninety percent of the significant plantation homes throughout Louisiana. Although each one has their own unique beauty and history, I can honestly say that as far as appearances go, there is no other plantation home that resembles San Francisco Plantation. Depending at what angle you are looking at the house, you may see something different. Visitors have suggested that from where you are standing, the home resembles everything form a grand riverboat to a colorful wedding cake!
San Francisco Plantation was built in 1856 by Edmond Bozonier Marmillon. It is the most distinctive and only authentically restored plantation on River Road. It features five artistically hand painted ceilings, faux marbling, and faux wood graining throughout and antique furniture by master craftsman John Henry Belter.

Although the house is considered antebellum in regards to when it was built, it is certainly not typical of the period. Its style and coloration are totally distinctive. The house is so distinctive, in fact, that it inspired novelist Frances Parkinson Keyes to write "Steamboat Gothic", a story about a family
she imagined lived there.
The most important period in the history of the mansion was the time of prosperity in the late 1850's, when the intricate decorating and remodeling were undertaken. Little was done after that, until the Bougère period. The Bougères, who had a larger family, added two bedrooms on the first floor and removed some of the large doors in the main entrance. The stairways were partitioned and gas lights were installed. In 1904, the Ory family purchased the property and added a kitchen and bathrooms but fortunately undertook few other alterations.
As a result of the Great Flood of 1927 the Army Corps of Engineers constructed the present standard levee and completed it by 1932. Local residents were among persons who lobbied the Louisiana legislature to pass a measure that would save as many plantations along the River Road as possible. Fortunately, the Corps was able to curve the levee around San Francisco at the time it was owned by the Ory family. The house was listed on the National Register of Historic Places in 1974 when the San Francisco Plantation Foundation began restoration. In 1954, the Ory family leased the house to Mr. and Mrs. Clark Thompson who maintained the premises and opened the mansion to the public where it is a regular tourist attraction to this day.
Our investigation was bitter sweet, as were honored to be allowed access, yet we had to share the night with a wedding that was taking place on the grounds. This extremely curbed our attempts at trying to record valid and untainted evidence. Still, as the old saying goes, “we made chicken salad out of chicken crap” and decided to go through with what we would simply call a preliminary investigation.
Based on records, the original owners, Edmond and Louise, had five daughters. One died at child birth and another died a tragic death under the age of two, by falling down one of the stair
cases. Instances of shadows being seen, voices being heard, and objects moving on their own are the most commonly reported forms of activity. As stated earlier, our time to investigate was limited due to the wedding in the nearby banquet area, so we ran only one DVR setup through some of the more "active" areas. At one point in the night, several investigators thought they heard scratching sounds coming from one of the closets. After closer examination, we found it to be an automatic air freshener, that sprayed a fragrance every few minutes. The spritzing sound is what we initially though was scratching! Debunking is a healthy and essential practice for an investigator to conduct, yet sometimes it is disheartening and also can be embarrassing when you sometimes find out the simplicity of the logical explanation. Then again, it's always better to embarrass yourself with your debunking skills than prancing around with evidence that you swear is valid proof of the paranormal, only to have someone else debunk it! I've always said that an investigator must be their hardest critic of their own evidence. If you won't do it, there are lines of people that are dying to.