U.S.S. Kidd - Baton Rouge, LA (The Pirate of the Pacific) 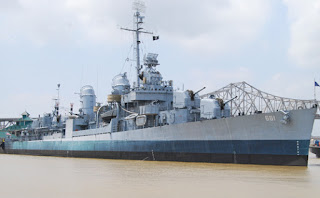 
As a child, I can remember taking a class field trip to Baton Rouge and visiting a battleship. We were young kids, having no knowledge about what we were seeing. We just knew it looked cool because “it had guns on it!” It wasn’t until years later when I learned how historically important this ship was, not only as an valuable fixture for the state, but for its great services it offered to the United States military.
The U.S.S. Kidd is a Fletcher-class destroyer named after Rear Admiral Isaac Campbell Kidd, Sr., who was killed during the attack at Pearl Harbor. This ship, identified as DD-661, as it was the Navy’s six hundred and sixty-first destroyer built, was officially christened and launched on February 28, 1943. From here on, the U.S.S. Kidd began its colorful journey through the open seas.
Its first excursion was to simply be delivered to the Brooklyn Naval Shipyards. In an unconventional fashion, the Kidd arrived proudly flying the skull and crossbones flag high atop its mast. One can only imagine how odd it must have been to see a U.S. Naval ship flying the flag of the Jolly Roger. However, the uniqueness turned into tradition, as the flag became a regular fixture to the ship. What is most interesting is that after receiving approval by the appropriate officials, the ship's crew painted a pirate on their smokestack. To this day, the Kidd, known as the “Pirate of the Pacific” is the only U.S. battleship to ever be granted permission to fly the flag that represents piracy.

The fun had been had and now it was time for the U.S.S. Kidd to showcase what it was truly designed for. The ship was commissioned on April 23, 1943 and its first duties were to escort new carriers from Norfolk to Trinidad. By August of that year, the Kidd continued its escorts into Pearl Harbor.
For the next several months to follow, the battleship continued along with its duties of providing escorts, rescuing downed pilots and providing anti-aircraft defense. In one particular rescue, the Kidd fought off eight Japanese bombers while simultaneously bringing two downed pilots to safety and not receiving any damage. It appeared that the U.S.S. Kidd must have had a four leaf clover jammed up its stern, as it would continue its various missions without any damage to the ship or injury to its crew. Of course, this rare luck would not last forever.
On April 11, 1945, the Kidd was assisting fellow ships: the U.S.S. Black, Chauncey, and Bullard in what was actually a regular raid on Okinawa. In the distance, the Kidd noticed several dogfights taking place between Japanese pilots and members of the combat patrol. As many of us know, this new era of warfare had brought about the kamikaze pilots, which were the hardest type of attack to defend. It is literally impossible to fight off a pilot with a death wish, as even if you shoot him down, if he is skilled enough he will still glide into your vessel, detonating his munitions. Such was the case as the Kidd noticed a Japanese pilot attempting to dive down into the U.S.S. Black. As the plane leveled out to make its attack, it suddenly pulled up, missing the Black and set its sight on the Kidd. Heavy machine gun fire and a last minute swing of the rudder proved to be futile, as the suicide pilot crashed into the front boiler room of the ship. The kinetic force of the crash sent the plane’s bomb straight through the other side of the ship, detonating shortly thereafter. The crash claimed the lives of thirty-eight soldiers, while also injuring fifty-five. The ship’s commander and doctor were amongst the injured, putting the Kidd in an even worse predicament.
Fortunately, even with additional enemy planes convening to the damaged Kidd as a shark frenzies over the presence of blood, the accompanying battleships provided coverage to allow the winged pirate to retreat to safety. Slowly but surely, the Kidd made its way to the Caroline Island, reaching Ulithi, only after burying its dead at sea along the way.

Once repaired, the U.S.S. Kidd was back in action, conducting several less critical missions throughout the fifties and sixties. On June 19, 1964, after over twenty years of service, the Kidd was finally decommissioned. When all was complete, the battleship had earned twelve battle stars during her career: eight for service in World War II and four for service in Korea. On May 23, 1982, the U.S.S. Kidd made one last voyage to its final resting place where it sits to this day in Baton Rouge on the banks of the Mississippi River. It has been restored to its original beauty and is open to the general public to tour.
Visitors and staff who have wandered the narrow corridors and bunkrooms have reported a great deal of strange phenomena. Guests have claimed to see the full bodied apparitions of young men in 1940’s-era naval uniforms patrolling the tight passageways. Interestingly enough, people have also seen ghostly appendages, if you may, as arms and legs have been seen passing through the solid walls with no one attached to them. As I type this, I can't help but find the unrelated similarity between this and the infamous Philadelphia Experiment, involving the rumored teleportation and time travel of the U.S.S. Eldridge. For those not familiar with this case, scientists were attempting to test Albert Einstein's unified field theory, by uniting the fields of electromagnetism and gravity into a single field, causing the ship to become invisible. Rumors are that the experiment initially worked with horrible side effects, such as the above-mentioned "sailors sticking out of the walls." Sorry for appearing to veer off topic, a problem which you will see quite often. However, I write what I think, as I think it, which is the cause for my unique, scatter-brained style. Some like it, some don't!
Now, to steer this ship (no pun intended) back on track, an interesting history along with haunted tales of the U.S.S. Kidd continues to attract tourists on a regular basis. The U.S.S. Kidd even offers overnight stays in the actual bunkrooms so you can try your luck at your own ghostly experience inside the famed Pirate of the Pacific. If you would like more information or would like to make overnight reservations, please visit www.usskidd.com