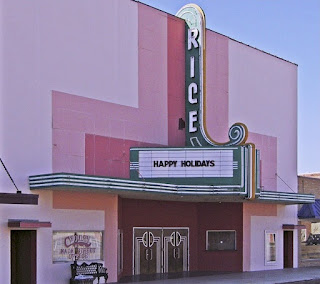 On any given Saturday night and in any given town, you will find some sort of happening get-together. Outsiders call it a party, we Cajuns call it “passing a good time!” Many venues have been built throughout the years to allow such get togethers amongst locals. Whether it be Zydeco, Swamp Pop, or traditional Cajun music, folks were always looking for an excuse to have a fais do-do, which literally translates into “go to sleep”, however when used in this context, it means a late night dance. I’ve always been amusingly fascinated at much of Cajun terminology, as the translations rarely mean what they are meant to be. My favorite has always been lash pas la patate. In English it simply means “don’t let go of the potato”, however, in Cajun slang, it is used to bid someone farewell, basically telling them to “take care”. Not to be too crude but I can't help think of another. Have a bad case of diarrhea? Well in French, you have a spell of the vas veetes, or the "go quicks"! Anyone who has had them knows that when it hits, you can't help but do what it says and "go quick"! Hey, don’t look at me; I don’t make the rules, I just know the law!

Don’t let the small quiet town of Crowley fool you, for there just so happens to be one of these entertainment venues. In 1940, the Art-Deco styled Rice Theatre was constructed by the Southern Amusement Company. Locals were elated but as with traditional Louisiana “luck”, a great high is always followed by a crashing blow to the kiwis, if you know what I mean! Before the theatre even opened its doors to the general public, the Great Flood of 1940 invaded the small town of Crowley, engulfing it with quite the deluge, bringing in about eight feet of water throughout the entire town, destroying much of the homes and businesses.
The Rice Theatre had to start all over, as water had damaged much of the building. Fortunately, hard work and diligence paid off, as the theatre repairs were complete and it finally opened to the general public in January of 1941. The theatre quickly became a huge success and a popular hangout where locals could tap their toes and clap their hands to the latest in Gospel, Country, and Cajun music.
Years of wear and tear began to take its toll on the building, as it fell into disrepair and was sold to the City of Crowley in 1986. Concerned citizens and local town administration could not just sit back and watch this historic building fall into complete decay. They quickly established the Rice City Civic Center Project, where thousands of dollars have been raised over the years by generous donations from the local community, the city and other preservation societies. Remodeling began once again on the Rice Theatre and improvements continue even to this very day.
Other than a few reports of eerie feelings and strange sounds, there were really no major reports of the theatre being haunted. People may ask, “Why investigate a location if you do not even know if it’s haunted?” Well, you may be surprised at what you stumble upon. Many of our most active investigations have been at venues that had no prior haunted reports. Sometimes, if it looks creepy and feels creepy, you just have to try your luck. You may very well get a “dud” but there is always the chance something is hiding, waiting to be captured. I mean, think about the first caveman who touched fire before he realized “this crap burns!” or the first native who said, “maybe I shouldn’t have ate that little blue frog!” As my grandmother always told me, “You don’t know what you can do until you try!”
Ok, now that my “after-school special” motivational speech is over, back to our investigation! During our night there, we heard several unexplainable sounds, many of which sounded like people whispering in the distance. We captured several interesting bits of audio that evening. In particular, as our investigators were in the balcony area, which were once reserved to segregate black guests, as one member of the team asks if one of these prior visitors were present, we captured a simple audio clip saying, “yes”. Later in the evening, we heard a single key being played on the theatre’s piano. As we rushed to the area, no one could be found.
An investigator sat next to the stage, which had a small door with a missing door knob, enabling him to see light on the other end. One thing about ghost hunting; sometimes boredom takes over, putting you in a trance where you literally stare off into space as you find the demons inside you whispering in your ear, “Go to sleep!” Such was the case, as the investigator stared at this door with no knob. Suddenly, he noticed the light on the other end fade out, as if someone had walked up to the door. The obstruction stayed there for about two to three seconds then appeared to walk off. The investigator quickly ran to the door and opened it, to find no one there!
As the investigation drew to an end, the members were in the old projection room where it was reported that the door would open and close on it its own. Investigators began to ask aloud for the door to close, of course, to no reaction. The team figured it was time to call it a night so they packed up and headed out. Staff of the theatre locked up the building as we all departed together. The next day, staff contacted us to let us know that when they returned that morning, the door in the projection room had, once again, been closed completely shut! The team and accompanying staff member had all confirmed they had left the door opened before leaving the building that night.
Needless to say, what we thought would have been a quiet investigation turned out to be a bit more eventful than expected. Hate to say “I told you so” but you really don’t know what you may find at some of these potential hidden gems. In regards to the issue with the door closing, we will never be able to truly pinpoint what happened. Someone could have closed it and not remembered or maybe there was a presence with us that was a little stubborn and wanted to show us they did not command like a performing monkey. I’ve often said that spirits are like three year old children and angry wives; they will do what they want only when they feel damn good and ready!