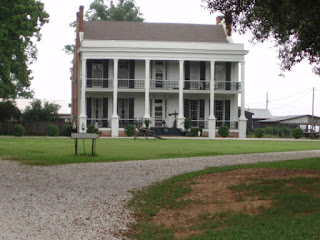 
Located on six hundred forty acres of working farm land in Cheneyville, Loyd's Hall Plantation is truly a unique plantation in many ways. The home was built in 1820 by William Loyd, originating from the famous Lloyds of London. However, being the "black sheep" of the family, he moved to America and was forced to drop one of the "L's" from his last name. Mr. Loyd was quite the eccentric character, being disliked by many people. Proof of this can be found in the original front door, which is now the door to the dining room. On it, you can still see gashes left by Indian


arrowheads, shot by the displeased locals! There are also bullets lodged in the wall from a previous dispute that are still visible to this day. Mr. Loyd then began working with both the Union and the Confederacy during the Civil War. When word of the double agent's affairs got out, William finally met his demise and was hanged in his own front yard. The home's tragedies did not end here, as Mr. Loyd's later relative, Inez Loyd, jumped to her death from the third story attic. The suicide was said to have taken place because Inez was stood up by her fiancé. The third floor was also said to have been home to a small school house on one side and the makeshift residence of the teacher on the other.﻿

The teacher who lived here was said to have been in a relationship with a Union soldier who chose to stay behind after the troops left. He was often seen on the front porch, serenading the teacher with a violin. It is at this point, that history in unclear. Some sources say that the soldier was then shot by the teacher's sister, while others say it was an angry neighbor that committed the murder. Needless to say, the soldier was, in fact, shot on the third floor and was actually buried under the house. Years later, his remains were exhumed and moved to an undisclosed location. What was left was a large stain on the third floor, said to have been the blood stain left over from the murder.
For years, guests and staff of Loyd's Hall have claimed to have experienced numerous ﻿ paranormal occurrences. Reports of disembodied voices and music being heard, aroma of food and objects being moved around seem to be the most common reports. I have always enjoyed paying visits to Loyd’s Hall. The housekeeper is extremely friendly and is always happy to share her ghostly experiences. On numerous occasions, she has reported hearing her name being called and smelling food being cooked in the adjacent cottage, which once served as the outdoor kitchen. She has often heard the sound of a violin playing, possibly the serenading soldier whose infatuation for his lost love is still echoed in eternity. Current owners have reported a small stuffed animal being found throughout various portions of the house while no one was there. As you will see in the pic above, we used a small stuffed animal during our investigation as what is known as a "control object". In a nutshell, a control object is basically an object used to evoke a response. For example, if a location is said to be haunted by children, we may use a toy truck and ask for the spirit to move it.
During our years of operation, we have always claimed to use scientific and analytical methods to conduct our investigations. Hardcore skeptics love to attack this claim as they arrogantly bark, “You are no scientist and nothing you do is science-related. You just use electronic devices not intended for their original purposes to claim there are ghosts!” As I hop on my soapbox, let me remind people that I have never claimed to be, nor do I want to be, a scientist. Using the standard scientific method, consisting of a hypothesis, tests, and results, while trying to rule out logical explanations is what our group seeks to accomplish. This is, by far, different from what many groups out there do. It is just unfortunate that the above mentioned skeptics and trash talkers lump us all in the same category without doing their own research. Now, off my soapbox!
As our initial investigation commenced, the first matter at hand was to attempt to put to rest a long lasting rumor: Was the stain on the third floor actually blood? To test this accusation, we decided to take a page out of an episode of "C.S.I." and turn to a tool often used by crime scene investigators; luminol. Luminol is a versatile chemical that exhibits chemiluminescence, with a striking blue glow, when mixed with an appropriate oxidizing agent. It is a white to slightly yellow crystalline solid that is soluble in water and most polar organic solvents. Luminol is used by forensic investigators to detect trace amounts of blood left at crime scenes. It is also used by biologists in cellular assays for the detection of copper, iron, and cyanides. The question was: Could luminol detect traces of blood that was approximately one hundred and eighty years old? After interviewing a Criminal Justice professor, who had experience with luminol while he was a detective, it was learned that we could, in fact, be able to pick up blood that would be that old.

Now, for the moment of truth! As soon as the sun went down, we all made our way to the third floor with our bottle of luminol. We all huddled around the stain, which actually looked more like a grease stain than blood. We then began to spray an even layer of the solution onto the stain as we held our breath. Slowly, to our amazement, we began to see the reaction take effect, as glowing splatter marks became visible! The glowing areas even seemed to concentrate more prominently in the joints between each strip of wood. We were all shocked, yet pleased, to be the first individuals to thoroughly validate years of reported claims. Although a little hard to see, you can view the video of the test by clicking HERE.
After our luminol experience, we were so elated that we didn’t even care if the rest of the night was uneventful. We captured one interesting audio recording of a muffled voice talking as two investigators were having a conversation but the clarity was not substantial to even consider it as paranormal evidence. Future investigations will hopefully prove to be more fruitful. Regardless, Loyd’s Hall Plantation is great place to visit, filled with great stories and friendly staff! For information regarding the home and to book your overnight stay, visit www.loydhall.com