The Grand Opera House - Crowley, LA (From Brothels to Broadway) 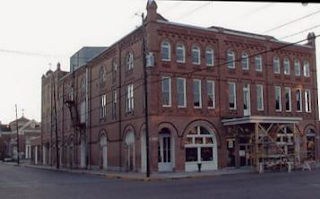 As mentioned with the Egan Hotel, the Grand Opera House was not only owned by the same individual, requiring the same amount of persuading, but it had also never been investigated and rumored to have been haunted for years by guests and staff alike. Some may call it bragging, but I call it being proud enough to boast the fact that our group has often been given unprecedented access to many historical locations in Louisiana. This is an attest to our years of hard work, great recommendations, and quality service.
David E. Lyons, born in 1867, had one vision for his small town of Crowley, LA. His vision was to bring culture to his beloved town and he would do so by building the Grand, a twenty-two thousand square foot, second-story opera house. In 1898, at the age of twenty-nine, Mr. Lyons purchased the property for a mere five hundred dollars and began building his magnificent opera house, which he completed two years and eighteen thousand dollars later Mr. Lyons carefully constructed his masterpiece using virgin Louisiana cypress, pine and oak. This mostly wooden structure was accented with pressed tin tiles and hand-painted angel medallions in the four-boxed seats. The steep slope of the floor created perfect sight lines for the one thousand seats it is said to have held.

On opening night, November 23, 1901, eight hundred patrons showed up to see Harry Ward's Minstrels. The local Daily Signal wrote, "It was a pleasant surprise to all of them to know that Crowley possesses such a beautiful little playhouse." Other acts and appearances throughout the thirty-nine years it remained open included Huey Long, Clark Gable, the great opera singer Enrico Caruso, Babe Ruth, and Madame de Vilchez-Bisset of the Paris Opera. In addition to its use as a vaudeville house, the Grand also served as a silent movie house.
When Mr. Lyons died in 1940, the opera house was closed and left nearly untouched and, fortunately, well-preserved. Although it was hidden from the view of the public for almost sixty years, it was never forgotten by its former patrons.
Never would we have imagined that an Opera House would have been home to so many establishments as well as dark events! In addition to being a gorgeous opera house, it has also been home to a general store, the town morgue, a restaurant, housing quarters, saloon, gambling hall, and even a brothel!
For years, there have been reports of activity in the opera house. A photo taken in the 1920's shows, what appears to be, a figure standing in one of the box seats. Cold spots have often been felt by construction workers, shadows have been seen, and electronic devices have failed to work in certain areas.
History shows the opera house has also been home to several grizzly events as well. Two individuals were murdered upstairs, another two individuals died of natural causes, and one maintenance worker died from strangulation on the rafters above the stage. His death was neither labeled accidental or a suicide.
Prior to beginning our investigation, we set up eight IR cameras on two DVR systems, focusing on the stage, box seats, and the area once used as a brothel and saloon. We then conducted our base EMF and temperature readings, only to find several pockets of high EMF's in areas of old wiring that primarily ran under the wood floors.

Once the investigation began, we did receive several unexplainable EMF spikes, most of which were located on stage hand right, which coincidentally, was the exact location where the maintenance worker died from being hanged. Besides this, there were no other first hand experiences, yet there was still tons of evidence to go over. Evidence review proved to be rewarding, for a very interesting audio clip was recorded. Audio analysis provided a very clear EVP of a female saying, "I can hear."
Unfortunately, as with the Egan Hotel, paranormal investigations are no longer allowed, as we would have loved to return. However, on a positive note, after our investigation, the opera house received a handsome grant from the state and they were able to conduct massive remodeling, reopening the beautiful venue in 2008 into a bigger and better-than-ever version of its former self to entertain guests from all over!