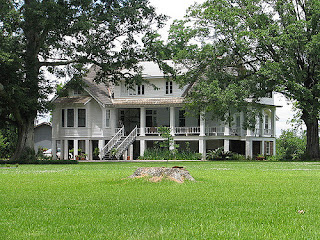 This quaint little plantation home was built in 1843 by Virginian, George Mason Graham.  Graham was familiar with plantation life and built a three storied house, a granary, a brick kiln, a saw mill, a cotton gin and a wharf for barge traffic on the bayou. Graham wrote an autobiography and left much correspondence that is in federal, state and university archives. Graham also built what is probably the only underground tomb on a plantation and buried there a wife and a son that has given rise to the story of the “soldier ghost.” Mr. Graham is probably most known for his work with the state's educational system, obtaining federal property, now known as the Pentagon Barracks, in Baton Rouge for a new location for a state university, which you may have heard of: Louisiana State University.

In 1915, the home was sold to Mr. Charles Robinson, who needed to conduct massive repairs, as the home was in poor condition. The home was handed down through several generations and is currently in the hands of retired Judge Rae Swent, who now operates the home as a lovely bed and breakfast.
For years, Tyrone Plantation is said to be home to several hauntings. Primarily, guests and homeowners alike have reported seeing the apparition of a Confederate soldier wandering the grounds as well as the disembodied sounds of young children playing and speaking when there are obviously no children present.
First off, let me give a special thanks to Judge Swent for being so hospitable to our group on our several visits to her beautiful home. She always greets us with open arms and usually always has a new haunted encounter to share with us! We always enjoy hearing the Judge's stories involving different guests who stayed the night and were spooked to some sort of ghostly experience.
During our one official investigation of the home, we unfortunately, did not obtain any legitimate paranormal evidence but there were a few interesting experiences. On this investigation, we used what is known as a “ghost box” or a “Frank's box”. We do not consider it a true tool to detect paranormal activity, as it its highly controversial. We merely were using it for entertainment purposes.
The device known as the Frank's box was created in 2002 by EVP enthusiast Frank Sumption for the purpose of communicating with the dead. The device can best be described as an AM radio receiver that scans through off channels, creating a white noise generator. It is theorized that this white noise is the energy required for spirits to communicate with the living. Though some groups may use this as a definitive tool for proving that a haunting exist, we do not, as the device is subject to high amounts of auditory contamination, causing what is known as auditory pareidolia, which can best be described as the audio version of seeing faces in the clouds or other inanimate objects. It's our brains own natural habit to find human characteristics in sounds or images, whether they exist or not.
Regardless, we were passing what can often be a slow investigation by experimenting with one of these devices. As we operated the box in scan mode, we began asking it various questions, as we would normally do during a standard EVP session. In one particular instance, the device stopped scanning and locked on to a local AM prayer station that was reciting a session of the Catholic rosary. Sure, it was coincidental, spooky, and generated a good laugh amongst investigators, but it was not definitive proof that we captured any paranormal evidence. Regardless, years of encounters and reports may beg to differ!