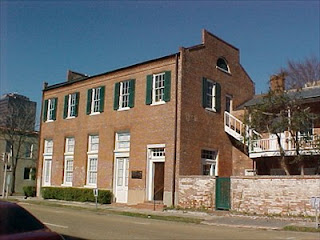 As I mentioned in the history of Angola State Penitentiary, prior to its construction, state inmates were housed at the first Louisiana State Penitentiary, located at the intersection of 6th and Laurel Street in Baton Rouge. North of the penitentiary grounds, stood a small building built around 1840. This is the only remaining building of the prison complex which existed from 1834 to 1917. It served as the prison store and clerk’s living quarters, ultimately becoming the warden’s house, as it is most commonly known today.
In 1925, the building was moved several blocks to its current location and an extensive renovation was conducted in 1966. The structure is now home to several offices. Not much is actually known regarding the hauntings associated with this location, but there have been several reports of unexplainable sounds, disembodied voices, and accounts of electronics going haywire for no apparent reason. Is this enough to slap a big “haunted” label on the building? Probably not, yet with years of rumors, one can only be intrigued to look into the reports further. I am unaware of any actual investigation ever being conducted here so let’s add the warden’s house to our “to do” list!
Posted by duplechien at 8:30:00 PM