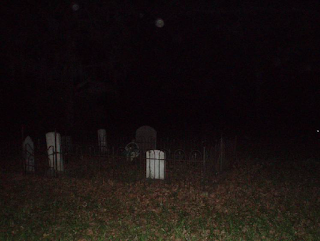 
Located off the backroads of Deville, Louisiana, the Holloway Cemetery (Hickory Grove Cemetery) is one of the oldest, if not the oldest, cemetery in the surrounding area, having graves dating back as old as the 1820's. The cemetery is quite large, yet the graves are spread out scarcely. The grounds are said to have once contained a missionary and the site of several hangings from the massive oak trees present, yet no verifiable documentation has been found of these ever existing.
Years ago, this was one of the first cemeteries that we used as training grounds, so to speak. Starting out with your own group is difficult, as you cannot just jump right in and start investigating private homes and grand historical locations. You have to start somewhere, and for most groups, public cemeteries are prime places to start.

The cemetery was first brought to my attention by a good friend of mine that had also conducted a few amateur investigations here. On his most memorable visit, he and another investigator were walking around one of the large trees said to have been used for hangings. They were only equipped with an EMF meter, a voice recorder, and a flashlight; pretty much all we had back in the day. The two investigators began to feel an unexplainable cold spot. Keep in mind this took place in the middle of the summer and the words “cold” and “summer” do not go hand in hand in Louisiana. They continuously ran their audio recorder during the strange experience. When they played back the audio, they heard a very chilling, no pun intended, voice saying, “It's coldest right here!”
I do not recommend visiting this cemetery any longer at night. To access the grounds, you must drive alongside and behind a private residence. The homeowners do not like the nighttime attention and will, I repeat WILL, contact the local law enforcement. I can attest to this fact from first-hand experience as our last visit ended in such fashion. It was not the first time our ghost hunting adventures have drawn the unwanted attention of the police and I am sure it won't be the last. Luckily, after some questioning, police have always been pretty understanding, although it is quite comical sometimes, as the police are expecting to encounter drunken teenagers doing God knows what, only to find ghost hunters. After getting a smirk and normally a sarcastic comment, police have sent us on our way with no harm and no foul.
Especially with the enormous surge in paranormal investigators, this is a prime example of following my disclaimer mentioned earlier. It is imperative that you get prior approval before visiting any locations at night, whether they are considered public or not. What may be public during the day, might get you a policeman's flashlight blinding you in your eyes at night, as you are drilled with more questions than a Nazi interrogation!